They might be fun to look at, but they’re not necessarily good news

Tide pools along the coast of central and northern California are filling up with inch-long, pink Hopkins’ rose nudibranch—a sea slug whose vivid coloring gives it a kind of punk rock appeal. 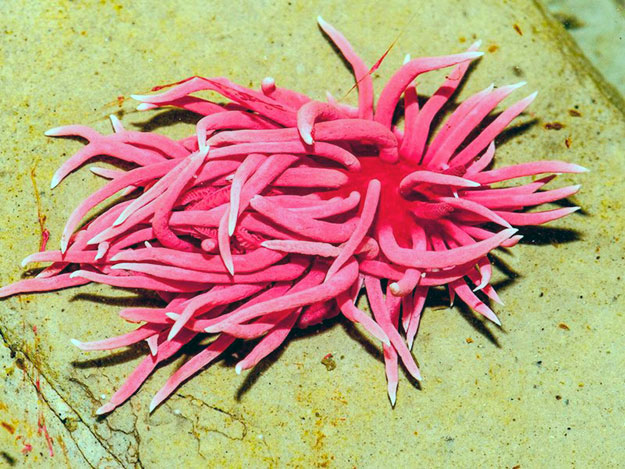 Scientists are logging dozens of the creatures per square meter, says the University of California, Santa Cruz. The sea slugs, common to the waters of southern California, have not been seen in such numbers in the colder reaches of the state since 1998.

That was when the last big El Nino events contributed to “periods of warmer-than-usual ocean water and heavy rains,” explains Science Codex. But there’s been only weak El Niño effects recently, and only a 50-60 percent chance of related conditions occurring in 2015. So what’s causing the slew of slugs?

According to UC-Santa Cruz , the population boom is reminiscent of one that hit California in 1977:

That bloom was also during a weak El Niño, but it happened to coincide with a major climate shift in the eastern Pacific Ocean known as the Pacific Decadal Oscillation. That shift marked the beginning of more than two decades of coastal water temperatures that were elevated compared to the preceding 30 years, triggering range shifts in numerous coastal species, including gastropods, barnacles, fish, and dolphins.

Today’s warmer ocean temperatures can be blamed, according to the Santa Cruz Sentinel, on rare wind patterns: they aren’t blowing away warmer surface water, and that encourages colder, deeper water to rise up.

Scientists aren’t completely sure of what is causing the change in weather and ocean patterns, though, nor how long it could last. As John Pearse, ecology and evolutionary biology professor at UC Santa Cruz, told the Sentinel, “We have no idea whether this is part of the ongoing oscillation back and forth or if it’s perturbed by global warming; probably both.”

Rising temperatures are bringing other usually southern animals to California’s northern shorelines—in the fall, an endangered green sea turtle was spotted near San Francisco. Yet, experts like Dr. Terry Gosliner of the California Academy of Science caution that while visitors like pink sea slugs are nice to look at, they may have dire implications for wider ocean life. He tells Science Codex, “Our current climate conditions are great for some of my favorite slugs, but we can’t ignore that warming seas mean less food for sea birds, and adverse impacts for all marine ecosystems. California’s unique marine life can’t always adapt to so much instability.