An ode to the reusable water bottle

A discussion on the damages of disposable water bottles and why you should get something reusable.

In 2010 I bought my first reusable water bottle.

It was big, metal and red from a Walgreens in Chicago for about six dollars, (not including taxes). I didn’t do it to save the planet, and it wasn’t to reduce waste. I hadn’t suddenly grown a conscience and decided to stop using plastic for the rest of my life.

Lollapalooza was that weekend, and to my surprise they weren’t selling water anywhere in the festival. Instead, they had water bottle refilling stations everywhere. The concept was completely foreign to me. I hadn’t really thought much about reusable bottles before, but after three days of music and free water I was a convert. I brought it home and the tradition continued. In one week I said goodbye to Poland Spring, my favorite brand, and said hello to the reusable world.

It became a staple of my life. Five years later, I feel naked without it. I don’t leave the house without refilling it. My hand feels light without it dangling from my fingertips. It’s still the convenience of having it with me, of not having to buy water, but that’s been overshadowed by something larger.

By my estimation, conservatively, I’ve saved over 800 plastic water bottles in the past five years. That doesn’t sound like much, but if just one percent of Americans made the switch to reusable water bottles, we could eliminate roughly 500 million water bottles annually from winding up in our landfills, oceans, and on the sides of our roads. We’re drowning in plastic.  And that’s not the only problem.

The Great Pacific Garbage Patch stretches from the West Coast of California to the Eastern Coast of Japan. Millions of tons of plastic, held together by ocean currents and cumulative weight, stretches across the largest ocean in the world. And it’s getting bigger every day.

It takes 17 million barrels of oil to produce plastic water bottles for Americans annually. That could fuel 1.3 million cars for a year, that could power 190,000 homes.

Instead?  It became over 50 billion plastic water bottles. According to Terrie-Ann Johnson, CEO of Clean Up Australia, “That’s a really poor use of a finite resource.”

American’s recycling rate of water bottles was at 23 percent in 2007, meaning that of those 50 billion containers, 38 billion ended up not being recycled. That’s over $1 billion of plastic wasted every year. 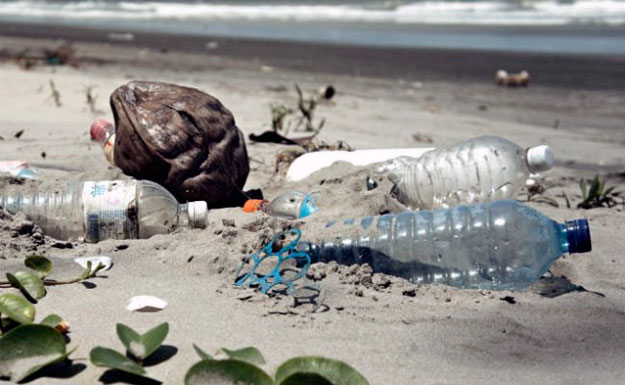 It’s indicative of a polarized global society. There are those who have and those who have not. 750 million people lack access to clean water, and over 850,000 die every year due to a water related illness. One in three, roughly 2.5 billion people, don’t have access to proper sanitation methods. All of these factors combined lead to extreme poverty that most of Americans cannot relate to, and out of all of this waste, the disposable plastic water bottle is the most familiar, and the biggest affront.

It begs the question: How many scary facts do we need to print before we realize that it’s time to move away from disposable plastic water bottles?

Disposable water bottles make up roughly one third of all litter in US national parks. So, since 2011 over twenty national parks including the Grand Canyon introduced a ban on the bottles in an effort to reduce waste and promote sustainability. The national parks went further by introducing a bill to Congress that would ban all disposable plastic water bottles in National Parks. This has been met with fierce resistance from over 200 producers of bottled water, dubbed ‘Big Water’ by media outlets.

Keith Rothfus, a congressional representative from Pennsylvania, has taken the legal reins in the fight against the water bottle ban, with the defense that some families will suffer from dehydration due to the new restrictions. This argument is fairly transparent, as the several water bottling plants located in Pennsylvania bring in an annual $6.6 billion a year to the state’s economy.

The epidemic isn’t going to end overnight, but maybe, just maybe, we can start with just one water bottle at a time. May I suggest going out and getting a metal water bottle for yourself. You won’t regret it.