Most homeowners in Utah benefit from a unique resource: Cheap untreated irrigation water for their yards. The state has no idea how much people consume, even as it ponders investing billions in new water development projects. 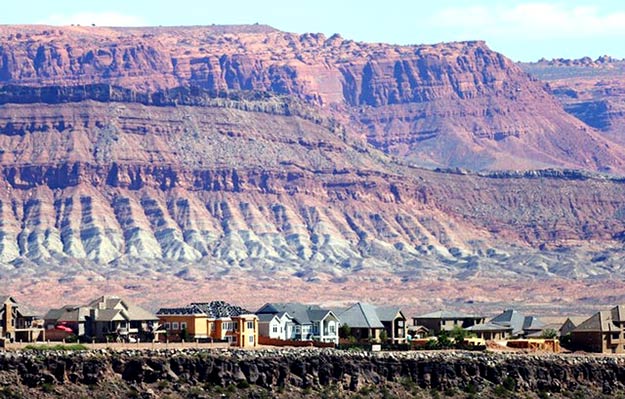 New single-family homes and others under construction are shown on a ridge in St. George, Utah. In an effort to keep up with growth, Utah is considering several large water projects, but some say it should focus first on cutting consumption, starting with unmetered outdoor water.

IF YOU LIVE in Utah, chances are good that you’re getting a sweet deal on water for your lawn and landscaping. In fact, you might be paying next to nothing for it, at least compared to nearly everywhere else in the West.

Utah has a unique system of delivering irrigation water to residential yards that dates back to the 1800s, when the state was settled by Mormon pioneers. It allows homeowners to access untreated agricultural water from canals, sold at an unmetered flat rate, to irrigate their lawns, gardens and landscaping.

Known as “secondary” water, these systems were originally constructed to divert streams to irrigate farms. But in an unusual arrangement, when farms were paved over for housing development, the untreated water stayed with the land. Every new homeowner got two water systems: untreated water for landscaping and treated water for indoor use.

This system has made Utah residents the thirstiest water guzzlers in the West – and in the nation as a whole.

“This is pretty darn unique to Utah, especially since it’s so widespread,” said Amelia Nuding, a senior water resources analyst at Western Resource Advocates, a nonprofit based in Boulder, Colorado. “There is also a general sentiment that residents want their freedom, and they don’t want their local government or their state telling them what to do and how much water to use. That’s a sentiment that is strong across Utah.”

The issue is receiving greater attention in light of plans for massive water development projects in Utah, which some state leaders say are needed to serve rapid growth. This includes a controversial proposal for new dams on the Bear River, and a giant pipeline to divert Colorado River water to the fast-growing St. George area.

Critics like Zachary Frankel, executive director of the Utah Rivers Council, argue that the state could serve growth simply by reining in the wasteful use of secondary water.

“It is possible that some of us Utahns use more water than any other municipal population on the planet,” Frankel said.

According to a 2010 study of American water consumption by the United States Geological Survey (the most recent available), Utah residents consume a daily average of 167 gallons per person. That’s virtually even with Idaho, the heaviest water user in the study, at 168 gallons.

But in its own 2010 study, the Utah Division of Water Resources (DWR) estimated per capita residential consumption about 10 percent higher, at 182 gallons per day. And it now appears even that may vastly underestimate true consumption.

The DWR recently asked a consultant to examine its water use data-gathering practices. That new report, released in January, found the division’s estimates of secondary water use are so poor that total per capita water consumption may be 30 percent higher than has been reported.

In nearly every other community in the nation, when farms were converted to housing the irrigation water was usually sold to other farms or allowed to remain in-stream. And new homes used treated drinking water for outdoor irrigation as well as in their kitchens and baths – all measured and billed according to a single meter at the curb. 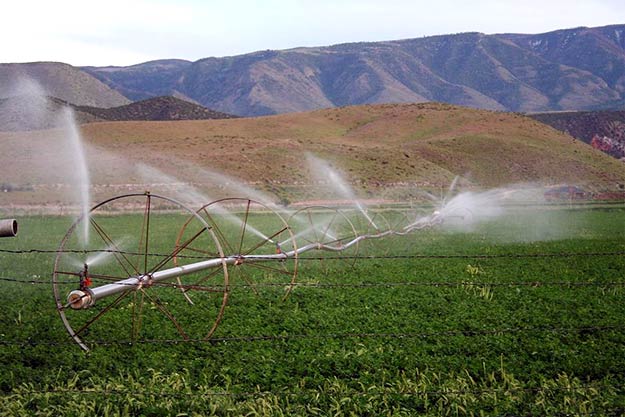 A field being irrigated west of Glenwood, Sevier County, Utah. In many cases in Utah, farmland converted to housing has retained use of unmetered water for outside irrigation.

But in Utah 61 percent of the state’s 462 urban water suppliers provide their customers with untreated secondary water. In nearly all cases, this is billed at a flat rate – often as little as $10 to $15 per month – meaning the customer can use all they want and the cost never changes. Sometimes the fee is even disguised among other charges on an annual property tax bill.

In one analysis, the state compared Salt Lake County, which does not provide secondary water, with two neighboring counties that do, Davis and Weber. It found that in those counties residents consumed 78 percent more water per capita than Salt Lake residents. The difference was almost entirely due to the availability of unmetered secondary water.

“It underscored the point even more that this needs to be reined in, so that people know how to use water efficiently,” said Nuding. “What really needs to happen is, the stuff needs to get metered.”

The state legislature has resisted imposing a metering requirement on secondary water providers for years. One reason is that the costs would be enormous, not only to purchase and install meters but also then to monitor and bill according to them on a monthly basis.

But the resistance may be breaking down. In February Republican state senator Jacob Anderegg introduced Senate Bill 204, which would require secondary water utilities to install meters on commercial, industrial and institutional accounts by 2026 and on residential accounts by 2028.

The law would not require utilities to actually bill customers according to the new meters. Anderegg said he expects that will come next.

“I can tell you right now, the cities are not going to like that,” Anderegg said. “But as night follows day, my thought is, as you start seeing just how much is being wasted, then the next step will be to set up the parameters on which an appropriate fee structure will be put in place. Without the data, what we don’t measure we never improve.”

He suspects requiring meters will reveal “significant waste.” He knows homeowners and businesses alike frequently forget to turn off sprinklers, or simply run them too long, because they know there won’t be any consequences in their water bill.

“I’m a conservative Republican,” Anderegg said. “I’m pro-business, pro-development. But that being said, as a conservative we’ve got to conserve. And the truth is we’re not.”

Anderegg’s district includes the city of Saratoga Springs, about 35 miles south of Salt Lake City on the shore of Utah Lake. In 2015, it became one of the few Utah cities to install meters on all its secondary water connections.

It was expensive: The 4,000-some meters cost about $3.5 million, said Jeremy Lapin, the city’s public works director. The city issued bonds to cover the cost. The results were immediate: a 30–50 percent reduction in secondary water consumption.

In the long run, it also saved the city money. Acquiring more water to serve growth and build infrastructure to store it would have required a bigger investment than metering. This would have boosted water rates, developer fees or both.

“I think the city, developers and residents all have been able to benefit,” Lapin said.