From Not Enough to Too Much, the World’s Water Crisis Explained

Many more cities than Cape Town face an uncertain future over water. But there are emerging solutions. 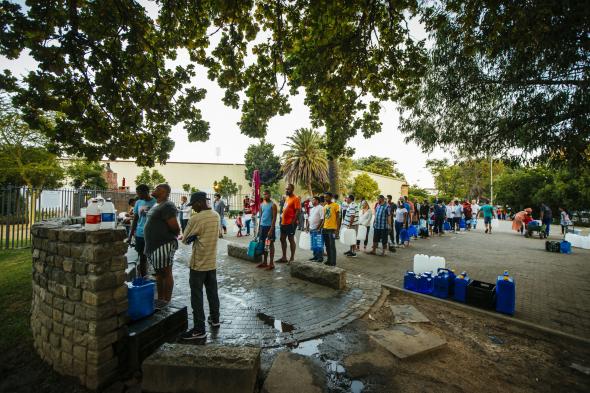 “Day Zero,” when at least a million homes in the city of Cape Town, South Africa, will no longer have any running water, was originally scheduled for April. It was recently moved to July. The three-year long drought hasn’t ended, but severe water rationing—limiting people to a mere 13 gallons (50 litres) per person per day—has made a difference. (To put this into perspective, an average U.S. citizen uses 100 gallons (375 liters) per day.)

“No person in Cape Town should be flushing potable water down a toilet any more.… No one should be showering more than twice a week now,” said Helen Zille, the premier of the Western Cape province, where Cape Town is located.

Like many places in the world, Cape Town and the surrounding region has likely reached “peak water,” or the limit of how much water can be reasonably taken from the area, says water scientist Peter Gleick, president-emeritus of the Pacific Institute. Gleick, who has spent substantial time in South Africa, says the country generally has good water managers.

“Two years ago, I would not have predicted Cape Town would face day Zero,” he said in an interview. However, climate change has disrupted the Earth’s hydrological cycle (water cycle), changing when, where, and how much precipitation falls. That has made water management planning far more challenging, he said. Yet our water systems were largely built based on the more stable climate of the past.

Many people are living with less water than they need, whether in the world’s most prosperous cities or in its bountiful agricultural heartlands. 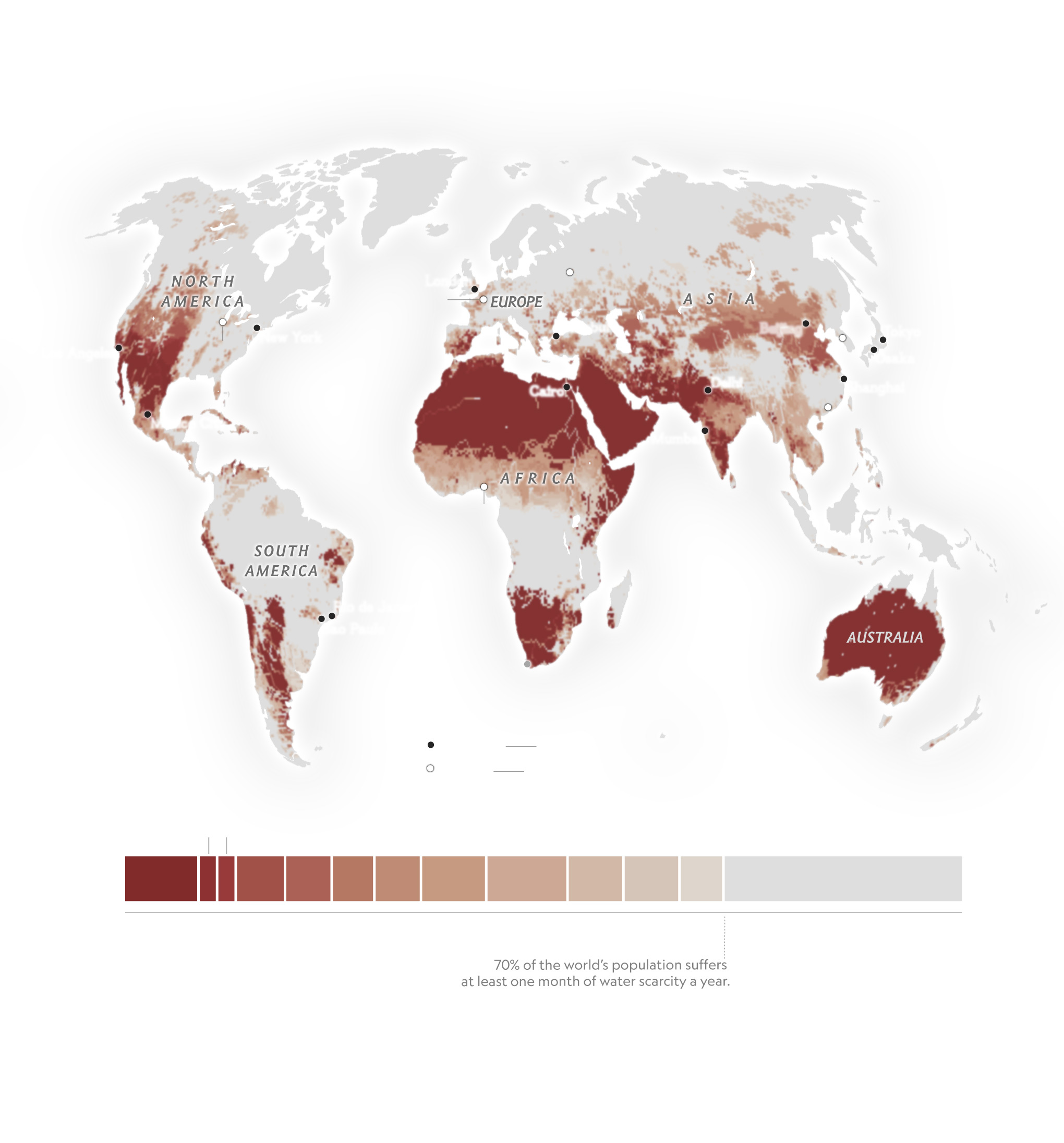 Brazil’s São Paulo, a megacity of 20 million, faced its own Day Zero in 2015. The city turned off its water supply for 12 hours a day, forcing many businesses and industries to shut down. In 2008, Barcelona, Spain, had to import tankers full of freshwater from France. Droughts have also become more frequent, more severe, and affecting more people around the world.

Fourteen of the world’s 20 megacities are now experiencing water scarcity or drought conditions. As many as four billion people already live in regions that experience severe water stress for at least one month of the year, according to a 2016 study in the journal Science Advances. Nearly half of those people live in India and China. With populations rising, these stresses will only mount.

Disaster data compiled by the U.N. clearly shows floods are also getting worse. They are happening more frequently, especially in coastal regions and river valleys, and affecting more people. Of all major disasters in the world between 1995 and 2015, 90 percent were weather-related events, such as floods, storms, heatwaves, and droughts.

Flooding accounted for more than half of all weather-related disasters, affecting 2.3 billion people and killing 157,000 in that 20-year period. Last year, the costs of extreme weather—floods, droughts, wildfires, storms—in the U.S. reached a record-topping $300 billion. These events displaced more than one million Americans from their homes.

Humanity is facing a growing challenge of too much water in some places and not enough water in others. This is being driven not just by climate change, but by population and economic growth and poor water management, experts warn.

“Water scarcity and flood problems are primarily due to quick growth, increasing vulnerability, and insufficient preparation,” says Arjen Hoekstra, a professor of water management at the University of Twente in the Netherlands. “Climate change, however, is and will worsen the situation in most cases.”

THE ROLL OF “EMBEDDED WATER”

Cape Town, where nearly four million people live, has a dry climate much like southern California. It is facing it’s Day Zero due to increased water demands from population and economic growth in combination with a three-year drought that’s severely limited the water supply. Yet what many people don’t realize is that typical home use of water—for washing, flushing, and cooking—represents only about three percent of humanity’s total water consumption, says Hoekstra. Agriculture uses the lion’s share, 80 to 90 percent, followed by energy production and industry.

The Cape Town region is the heart of South Africa’s wine country, which exported 113 million gallons (428.5 million litres) of wine in 2016 to Europe and the U.S. Yet this export represents a much bigger amount of water that was used to grow and process the grapes. Most of that water is no longer available for human consumption, according to Hoekstra, who is the creator of the water footprint concept. He and colleagues at the Water Footprint Network have worked out that it takes between 26 to 53 gallons (100 to 200 liters) of water to grow the grapes and process them into one five-ounce (125 ml) glass of wine.

In other words, the net amount of water used to grow or make something, be it a lemon, cellphone, or glass of wine, is the product’s water footprint. Most of the water used to make a typical glass of wine is lost to evaporation, with a small amount stored in the grapes, and the rest unsuitable for reuse. While the evaporated water will eventually become rain, it is unlikely to fall over the same vineyards, or even in the Western Cape province, meaning it is effectively “lost” to the region.

So that means a typical 25-ounce (750 ml) bottle of wine has a water footprint of nearly 200 gallons (750 liters). That means the region’s 2016 wine exports involved the net consumption of 113.2 billion gallons (428.5 billion liters) of water. This is water that is lost to the region.

South Africa already has 7 million people without access to water. Meeting their needs would require 33.3 billion gallons (126 billion liters) per year, one third of the amount the wine industry consumes. On top of that, the Western Cape exported an estimated 231,000 tonnes of citrus fruits, mostly oranges, in 2017. The water footprint of one orange—the net amount of water used to grow it—averages 21 gallons (80 liters). Using that basis, those citrus exports used up 30 billion gallons (115 billion liters) of the province’s water.

Not only does it take water to grow anything, it also takes water to make most things: cars, furniture, books, electronics, buildings, jewelry, toys, and even electricity. This water, which often goes largely unseen, is often called “virtual water.” What gets forgotten is that virtual water is as real as the water you drink.

South Africa, a water-stressed country, also exports oil products, minerals, and metals, all of which require enormous amounts of water. For example, it exported 211 tonnes of platinum in 2012. That’s like an export of 45 billion gallons (170 billion liters) of water—the estimated amount of water needed to mine and process the metal.

All of those exports could be produced using far less water, Hoekstra says. It starts with what he calls the most important water management strategy: grow and produce things in the right place. In other words, water-intensive crops like rice and cotton should be grown in water-rich regions.

In a global economy, drought can be a big issue even in water-rich countries, because of a growing dependence on imports. Around 38 percent of the European Union’s water consumption is reliant on water availability in other countries, to grow soybeans, rice, cotton, and other products that it imports. “That makes Europe vulnerable to increasing water scarcity and drought,” says Christopher Briggs, executive director of Water Footprint Network.

A coastal city, Cape Town hopes to solve its problem by getting a new water source: the ocean. It is building its first desalination plants. However, these are expensive and energy intensive. Gleick says it would be more cost effective for the region to shift to less-water intensive crops and to reuse treated wastewater. Currently, Cape Town reuses just five percent of its treated wastewater, compared to Israel’s 85 percent. Israel has also eliminated water-thirsty crops like cotton and made major improvements in water efficiency to free up more water for population growth.

California, which recently suffered through four years of drought and water restrictions, also needs to shift its agricultural production to less water-using crops, says Gleick, who is based there. And the state could increase its wastewater reuse from the current 15 percent, using the surplus to recharge depleted aquifers and use on crops.

WHEN THERE’S TOO MUCH WATER

Perhaps ironically, too much water too fast was California’s most recent water problem. Following its worst wildfire season in history, heavy rainfall this winter produced mud slides that killed more than 20 peopleand destroyed or damaged hundreds of homes. Hurricane Harvey, which hit Texas and Louisiana last August, causing $125 billion in damage, dumped more water out of the sky than any storm in U.S. history. Some890,000 families sought federal disaster aid, most often from flooding in the Houston area—in large part because many homes were built on flood plains. At the start of March, five states were under a state of emergency(Louisiana, Kentucky, Indiana, Missouri, and Michigan) due to heavy rainfalls and flooding.

Rapid population growth, building on floodplains or low-lying coastal regions, and climate change are the biggest reasons why flooding is affecting more people and causing ever greater damage, warns Gleick.

Climate change is the result of burning fossil fuels and has added 46 percent more heat-trapping carbon dioxide to the atmosphere. But even if fossil-fuel used ended today, that additional heat in the atmosphere will put 10 times more Americans at risk of being flooded out by rivers over the next 20 years, a new study reveals.

“More than half of the United States must at least double their protection level within the next two decades if they want to avoid a dramatic increase in river flood risks,” says lead-author Sven Willner from Germany’s Potsdam Institute for Climate Impact Research (PIK).

Rainfall changes caused by global warming will increase river flood risks across the globe, the study found. In South America, the number of people affected by river flooding will likely increase from 6 to 12 million. In Africa, the number will rise from 25 to 34 million, and in Asia from 70 to 156 million.

WHAT HAPPENS IF YOUR TOWN RUNS OUT OF WATER?

It bears repeating that these findings are based on the current level of carbon dioxide in the atmosphere. In reality, humanity added 45 billion tons in 2017, and will likely add that much or more in 2018. Without limiting human-caused warming to well below 3.6 degrees F (2 degrees Celsius), the river flood risk in many regions will be beyond what we can adapt to, Willner and team’s study concludes.

Climate change is also causing sea levels to rise, resulting in substantial coastal flooding during high tides and storms. More than 13 million Americans living on the coasts will be forced to move by 2100 because of rising ocean levels, according to a 2017 study by Mathew Hauer, a demographer at the University of Georgia. About 2.5 million will flee the region that includes Miami, Fort Lauderdale, and West Palm Beach. Greater New Orleans loses up to 500,000 people; the New York City area loses 50,000, the study estimated. These coastal migrants will likely go to cities on high ground with mild climates, such as Atlanta, Austin, Madison, and Memphis. (See what would happen if all the ice melted.)
“If people are forced to move because their houses become inundated, the migration could affect many landlocked communities as well,” said Hauer in a statement.