Ensuring water security is seen by many as an urgent challenge that could threaten the lives and livelihoods of billions of people if not addressed. Loucks (2011) projects that the population in water-stressed countries will increase from less than one billion people in the mid-1990s to four billion people in 2050. 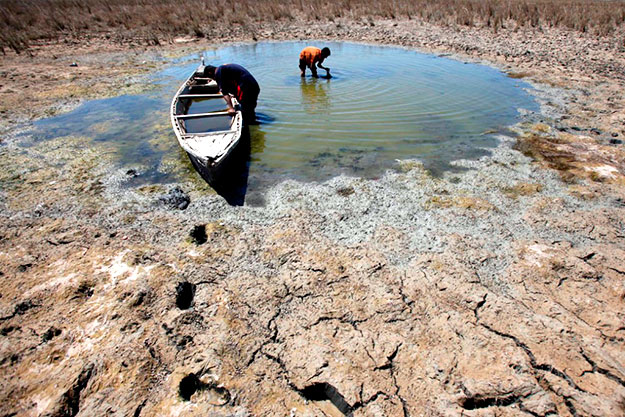 Mekonnen and Hoekstra (2016) estimate that four billion already face extreme water scarcity when seasonal and inter-annual variations in water availability are taken into account, implying that more than half the world’s population may currently face water insecurity driven by resource scarcity. In addition to the direct impact of scarcity on security, water shortages and disruptions may also contribute to traditional security threats (Hartley et al., 2017; UN Water, 2013). Concern with water security is reinforced by the appreciation that the impacts of climate change on people will be felt first and most strongly though the water cycle (Stern, 2007).

Water security was first articulated as a policy challenge at the World Water Forum in 2000 in the United Nations Ministerial Declaration of The Hague on Water Security in the Twenty-first Century and it has remained on the agenda of international organisations since then. Extreme weather events such as Hurricanes Harvey and Sandy, and Australia’s Millennium drought have brought water security for large urban populations onto the front page and up the policy agenda at the national and local levels (Dijk et al., 2013; Rosenzweig and Solecki, 2014). Water risk, the corollary of water security, has also become an established boardroom subject: it has been consistently cited by the World Economic Forum as a critical risk for businesses and in 2015 it was identified as the global risk likely to have the greatest impact on economies, environments and people (World Economic Forum, 2015).

A second significant global phenomenon intersects with water security: urbanisation. 3.9 billion people lived in cities in 2014, with half the world’s population living with 60 km of the sea (UN Department of Economic and Social Affairs, 2014). This trend is expected to continue: 66% of the global population is expected to live in cities by 2050, compared to 54% in 2014. The relationship between urbanisation and water security is a multi-faceted one (Srinivasan et al., 2013) but the increasing concentration of people in large, densely settled cities on the coast is likely to exacerbate water scarcity (Mekonnen and Hoekstra, 2016) as well as exposure to water-related disasters.

Appreciating the importance of water security is one matter. Defining and measuring it is much harder because of the many different perspectives on the paradigm (Cook and Bakker, 2012). Much effort has been expended on defining and populating indicators to capture the different facets of water security, including indicators of water scarcity, stress, water poverty, risk and sustainability. These indicators are reviewed in detail in two recent papers (Damkjaer and Taylor, 2017; Howlett and Cuenca, 2017). The United Nations has adopted a broad definition, which has the important quality of being inter-disciplinary and ‘holistic’ in not excluding perspectives or dimensions. (UN Water, 2013, p.1):

“The capacity of a population to safeguard sustainable access to adequate quantities of acceptable quality water for sustaining livelihoods, human well-being, and socio-economic development, for ensuring protection against water-borne pollution and water-related disasters, and for preserving ecosystems in a climate of peace and political stability.”
However, the disadvantage of such an all-encompassing definition is the difficulty of operationalising it (Cook and Bakker, 2012) and in identifying a suitable set of indicators that might be used to measure the current situation and changes over time.

Appropriate measures of water security depend on the level at which it is conceived: global, national, local or individual. While reporting at all these levels may be useful for different purposes, many papers emphasise the need for indicator development and application at the local level (Norman et al., 2013; Cook and Bakker, 2012; Grey et al., 2013). Local indicators are seen to be useful to reflect the very significant variation in water challenges between localities within a single country or river basin, allowing for more effective problem identification, and to provide a stronger link between indicators and decision-makers, as responsibility for many aspects of water policy is widely devolved to the local level (Rouse, 2013). Water security is also highly dynamic (Srinivasan et al., 2017), suggesting the need for indicators that can reflect changes at the local level.

Taking into account these arguments for local indicators which are able to reflect dynamic conditions, this paper focuses on the development of indicators to measure the water security of cities over time. This paper presents the indicator selection method and pilots this in two cities, Singapore and Hong Kong. It is the first in a planned series of papers from an ongoing research programme on the measurement of urban water security.

The focus on cities is motivated by the increasing concentration of people in urban areas, while the need to tailor indicators to the urban context is based on recognition of cities’ distinctive water challenges and responses to them. Firstly, cities often rely heavily on infrastructure to improve water security through transfer (McDonald et al., 2014; Brown et al., 2009), storage (Hall and Borgomeo, 2013) and treatment of water and wastewater, so a full picture of water security needs to take account of the impact of infrastructure. Secondly, cities often depend on other administrative jurisdictions for access to water resources and to discharge wastewater and their scale requires strong coordination mechanisms, bringing to the fore the importance of institutions of governance to manage these relationships.

The next section of the paper looks at the role of indicators in policy formulation and how indicator design influences the usefulness of the indicators.