Rising temperatures and declining snowpack in the mountains mean that the drought across the western U.S. is about to get even worse.

Sparse snowpack in California’s mountains in late winter 2014 is being repeated in 2015 (above, Mount Lassen in northern California). Snowmelt helps recharge the reservoirs that supply water to the Central Valley.

Snowpack—which essentially serves as a water tower for the western United States—produces vital meltwater that flows off the mountains each spring. Like a time-release capsule, snowpack refills streams and reservoirs and waters crops and cities through the dry summer in this largely semiarid region.

But the snowpack is becoming more like a snow gap, as temperatures in the Cascades and Sierra Nevadabecome too warm for the snow that replenishes the ecosystem each winter.

Temperatures in the West are rising, and winter storms—which have been in infrequent for years—are bringing more rain and less snow.

As a result, the water tower of stored mountain snow—which typically provides one-third of California’s water—is no longer refilling each winter, leaving a gap in summer water supplies. California now faces a fourth year of severe surface water shortages, and there isn’t a broad plan to deal with the scarcity of water that’s being created by persistent shortfalls of snow.

Groundwater has served as a Band-Aid by compensating for the lost water, but aquifers are being pumped faster than they can replenish, and like snowmelt, aquifers are shrinking.

A California snowpack survey on Tuesday found less than one inch of water stored in snowpack, or 5 percent of historical average, at a site in the Sierra Nevada 90 miles east of Sacramento. Statewide snowpack on March 3 was about 19 percent of the multidecade average.

As winter—the region’s wet season—nears its end, the harsh reality of another year with little mountain snowpack and resulting tight water supplies comes into focus.

January is usually California’s wettest month, but this year no rain fell inSan Francisco. In 2014, San Francisco had its driest January since 1850, with 0.06 inches of rain recorded.

“The situation is extremely bad,” Gleick said. Referring to late season snowstorms that could reduce the shortfall of mountain snowpack, he said, “we could get a March miracle, but the odds are against it.”

Water-well drillers in California’s Central Valley are working 24 hours a day to keep up with growing water demands amid the state’s worst drought on record. As irrigation wells dry up, farmers call for help from the drillers, but how much longer will they be able to find new water sources in the ground?

Despite powerful December and early February rainstorms that partially replenished California reservoirs, mountain temperatures above freezing have kept snowpack from forming. Average California temperatures from October through January were 53.3°F, the hottest October-January period in 120 years and nearly five degrees above the 20th-century average of 48.6°F.
Farther north, rainfall has been near normal in Oregon and Washington, but warm temperatures ranging from 15 to 25 degrees above normalhave prevented snowpack from building in the Pacific Northwest mountains. 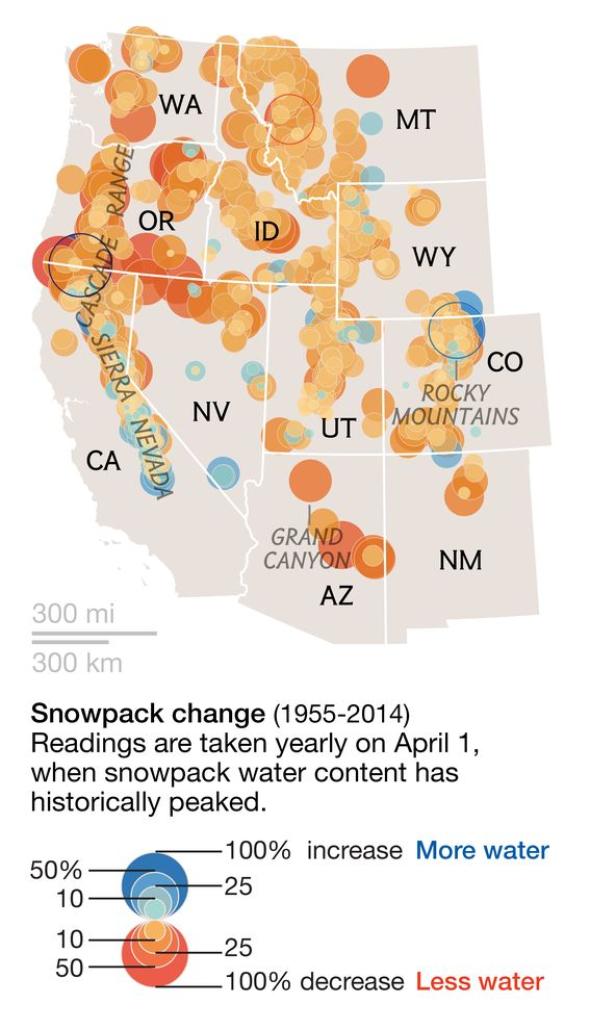 Hurricane Ridge in Washington’s Olympic Range, which normally reports 87 inches of snow by mid-February, reported four inches on the ground. Snoqualmie Pass east of Seattle, which normally has 85 inches of snow by now, reported 21 inches. In the Oregon Cascades on February 18, water content in snowpack ranged from 9 to 17 percent of average.
Ski resorts in California, Oregon, and Washington have suffered: Many have been closed for lack of snow. In Vancouver, in British Columbia, cherry trees bloomed weeks early, in late February. Alaska’s temperatures have been warmer than Boston’s, and Anchorage, with an average high temperature of 27°F in February, reached 33°F or higher 14 times in February.

Philip Mote of Oregon State University, who studies trends in western U.S. mountain snowpack, said in the October 2014 National Geographic article “When the Snows Fail” that “warmer winters are reducing the amount of snow stored in the mountains, and they’re causing snowpacks to melt earlier in the spring.”
In practical terms, shrinking snowpacks and earlier snowmelts from rising temperatures mean that the region faces a persistent and worsening drought.

The jet stream—a narrow band of westerly circumpolar wind that moves weather systems from west to east—usually brings cold winter weather to western states from the Gulf of Alaska.
Like last winter, this year’s persistent high-pressure ridge off the Pacific Coast pushed the jet stream north, bringing warm temperatures off the southern Pacific Ocean onto the continent. In midcontinent the jet stream has looped south, bringing frigid Arctic air to the east, similar to a “polar vortex” that brought persistent cold weather to the east in 2014. 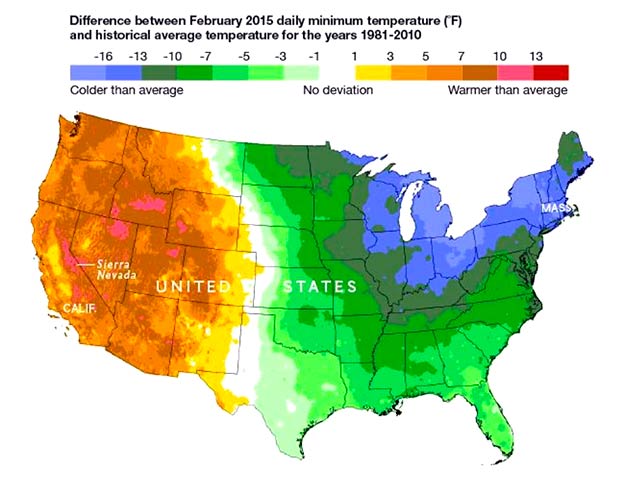 Powerful winter storms such as the “Snowmageddon” storm in February 2010 have affected the eastern United States, Europe, and Asia in recent years. Researchers now focus on whether warming temperatures and ice loss in the Arctic have contributed to these unusual weather patterns.

“We are trying to understand how rapid changes in the Arctic and changing sea surface temperatures are going to influence, or are already influencing, extreme events in the western U.S.,” Gleick said. “It is a very exciting area of study.”

As surface water scarcity rises, pressure increases on rapidly depleting groundwater, which in years of normal snow and rain provide 30 to 40 percent of California’s water, but in dry years supply close to 60 percent of state supply. A 2011 study led by Jay Famiglietti, a hydrologist and water scientist at NASA’s Jet Propulsion Laboratory in Pasadena, California, and professor at the University of California, Irvine, reported that Central Valley aquifers have been dropping each year by an amount nearly comparable to the storage in Lake Mead, the nation’s largest surface reservoir.

A Colorado River basin groundwater study in 2014 by Famiglietti and NASA colleagues showed that groundwater levels are being rapidly depleted to meet local water needs in the river basin, which also supplies surface water to California, Nevada, and Arizona.

Famiglietti added, “It is time to consider mandatory restrictions on water use.” He is concerned that since the groundwater law passed in 2014, there has been a rush to plant water-thirsty tree crops such as almonds in the irrigation-dependent Central Valley, before groundwater water use limits kick in.

California is the nation’s most productive agricultural state largely because of irrigation, which according to state data uses nearly 80 percent of the state’s managed surface and groundwater water supply. (A farm water use group contends that irrigation use is closer to 40 percent.)

Eric Holthaus wrote last year in Slate that almonds, the state’s most lucrative farm export, use 10 percent of the state’s water. And as surface water supplies shrink, declining groundwater must be pumped to keep these trees alive.

Scientists reported in January that 2014 was the hottest year in California since weather records began in 1895, with an average temperature of 61.5°F, beating by nearly two degrees the previous high of 59.7°F in 1934. Three other Western states, Nevada, Arizona, and Alaska, also reported 2014 as their warmest year since record-keeping began.

Last June, members of the Association of California Water Agencies, which manage about 90 percent of the state’s water, studied what may unfold this year if the state’s drought continues.

“Hundreds of thousands of acres of annual and permanent crops throughout the state would be idled,” their report said, “affecting the growers, local communities, related industries and the statewide economy.”

The report went on: “In a worst-case scenario for the agricultural industry, cotton production in California’s San Joaquin Valley could cease completely, resulting in severe economic losses from crop revenue, employment, shipping and more.” 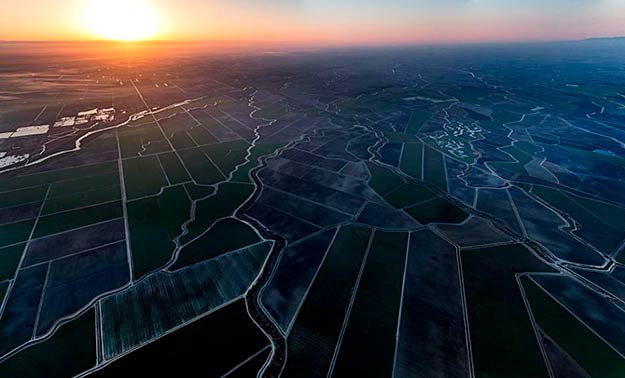 IS THERE A BACKUP PLAN?

Looking ahead, Famiglietti said, “My biggest fear for the immediate future, in particular in California, is that there really is no contingency plan if the drought continues. Many top-level managers will admit with honesty that they don’t know what the state will do if the drought continues, and if our water supplies keep plummeting.

“Beyond the current mode of operation, which is to operate in emergency mode and to really push conservation, we need a task force to begin long-range contingency planning, immediately,” he added.

A new study from Stanford University reports that low precipitation was key in starting the drought, but that heat, which has become more common in California, has been essential in maintaining and intensifying the drought. It also suggests that human greenhouse gas emissions—which keep rising—have increased the odds for more frequent warm and dry conditions across the state.

Researchers reported in February in the journal Science Advances that the U.S. Southwest and southern Great Plains will likely see drought of “epic proportions” in the second half of this century. Their assessment provides the highest degree of certainty yet on the impact of global warming on water supplies in the region.

On the study, National Geographic’s Brian Howard wrote, “The chances of a 35-year or longer ‘megadrought’ striking the Southwest and central Great Plains by 2100 are above 80 percent if the world stays on its current trajectory of greenhouse gas emissions, scientists from NASA, Columbia University, and Cornell University report.”

Tom Painter, a snow and drought scientist at the Jet Propulsion Laboratory who was not involved with the study, told Howard, “Over the past year, water managers and the public have started paying more attention to the possibility of a megadrought.

“Water demand has passed supply in some areas,” Painter said. “Throwing 30 years of drought on top of that means we’re going to have to change the way we live out here.”