Scientists: how 11B gallons of water vanished from lake in 90 minutes

For years, scientists have known glacial lakes can rapidly empty themselves of billions of gallons of water—in at least one case, faster than the speed at which water flows over Niagara Falls. 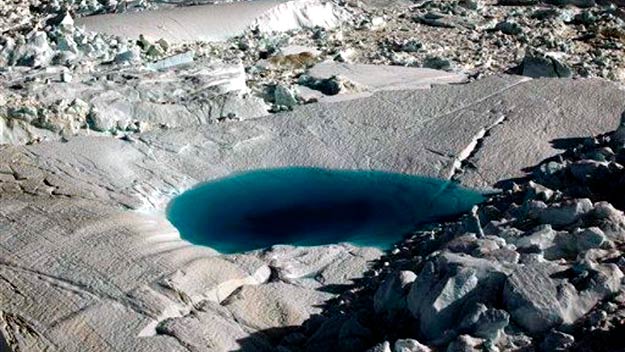 In this July 19, 2011 file photo, a large melt pool forms in the Ilulissat ice fjord below the Jakobshavn Glacier, at the fringe of the vast Greenland ice sheet.

Now, they finally know how it’s done. Researchers had guessed that the weight of the water caused cracks to form in the lake’s icy bottoms that let water drain thousands of feet to the ice sheet’s bed, but that didn’t explain why some lakes cracked and others didn’t.

To solve the mystery, researchers arranged 16 GPS units around Greenland’s supraglacial North Lake and recorded ice movements over three summers, in 2011 to 2013, per a press release.

They found that tension comes from below: Movements during three lake drainages showed ice was “jacked up” six to 12 hours before a lake bottom cracked, lead author Laura Stevens tells LiveScience.

What’s happening: Meltwater drains through vertical channels to the ice sheet’s base, where it accumulates between the bedrock and ice sheet, causing a bulge. The bulge floats the ice sheet, placing tension on the lake bottom.

Then, snap, a crack forms. “In some ways, ice behaves like Silly Putty—if you push up on it slowly, it will stretch; if you do it with enough force, it will crack,” Stevens says.

But volume does come into play. “You need both conditions—tension to initiate the crack and the large volume of water to amplify it—for hydrofractures to form,” Stevens says.

In the case of North Lake, a hydrofracture drained 11 billion gallons of water in 90 minutes. That draining water lubricates the base of the ice sheet, allowing the sheet to move faster toward the ocean, where it “discharges” ice, spurring sea-level rise, per Nature World News.

Stevens says the research “will help us predict more accurately how supraglacial lakes will affect ice sheet flow and sea level rise as the region warms in the future.”