The interplay between surface-water salinity and climate change in Central New York is the subject of a recent paper by researchers in Syracuse University’s College of Arts and Sciences. 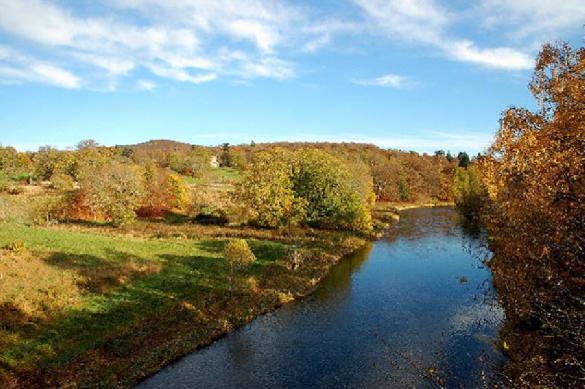 Kristina Gutchess, a Ph.D. candidate in Earth Sciences, is the lead author of an article in the prestigious journal Environmental Science and Technology (ACS Publications). Her co-authors at Syracuse include Laura Lautz, the Jesse Page Heroy Professor and chair of Earth sciences, and Christa Kelleher, assistant professor of Earth sciences. Another co-author is Gutchess’ Ph.D. supervisor, Associate Professor Zunli Lu.

Rounding out the group are Li Jin G’08, associate professor of geology at SUNY Cortland; José L. J. Ledesma, a postdoctoral researcher of aquatic sciences and assessment at the Swedish University of Agricultural Sciences; and Jill Crossman, assistant professor of Earth and environmental sciences at the University of Windsor (Ontario).

The paper draws on the group’s study of the impact of de-icing salt from Interstate 81 and other surrounding roads and highways on the Tioughnioga River watershed. Gutchess says their findings make her “cautiously optimistic” about the watershed’s future surface-water chloride concentrations.

“The long-term application of road salts has led to a rise in the river’s salinity level,” says Gutchess, who studies processes affecting the quality of surface water and groundwater. “While various models have been used to assess potential future impacts of continued de-icing practices, they have not incorporated different climate scenarios, which are projected to impact hydrogeology in the 21st century.”

Central to their experiment was INCA (short for “INtegrated CAtchment”), a semi-distributed catchment-modeling platform that assesses environmental-change issues. Gutchess calibrated the model for a historical, or baseline, period (1961-90), and used the results to make projections for three 30-year intervals: 2010-39, 2040-69 and 2070-99.

Based on the model’s projections, the salinity of the Tioughnioga’s east and west branches will start decreasing in 20-30 years. “A gradual warming trend between 2040 and 2099 will lead to reductions in snowfall and associated salt applications, causing [the river’s] salinity to drop. By 2100, surface-water chloride concentrations should be below 1960s values,” Gutchess says.

This is potentially big news for a part of the country that has experienced rising surface-water chloride concentrations since the 1950s, when road salting began.

Salt, or sodium chloride, is the most commonly used de-icing chemical in the country, spread at a rate of more than 10 million tons a year.

In New York State, a typical wintertime event requires 90-450 pounds of salt per lane-mile. Vehicle traffic picks up about 10 percent of the residue; the rest enters adjacent water catchments in the form of runoff, jeopardizing terrestrial ecosystems and drinking water resources.

Gutchess’ hydrogeological study is one of only a few combining long-term climate variability and salinity management. The INCA model framework enabled her team to assess stream response under 16 different future scenarios, taking into account climate, land use and snow management.

“INCA originally was developed to assess sources of nitrogen in catchments in a single-stem main river,” Jin says. “Here, we modified the model to incorporate a new multi-branched structure, enabling us to simulate daily estimates of in-stream concentrations of chloride. We also allowed for differences in salting practices between rural and urban areas.”

According to INCA, road salt accounts for more than 87 percent of Tioughnioga’s salinity. Current de-icing practices, combined with increased urbanization, will likely add to its salinity, but only for a while, thanks in part to the changing climate.

According to Lu, the study suggests that climatic impacts are not always negative in a specific region: “It is important to understand the nuances of climate change at various time and geographic scales. Ultimately, this project will help us manage our resources more effectively, as we adapt to future changes.”

With a wink and a nod, he adds, “At the same time, we should not make blanket statements about climate change. No one is exempt from its effects, pro or con.”

Gutchess is a member of EMPOWER, a water-energy graduate-training program at Syracuse that is sponsored by the National Science Foundation and directed by Lautz. Additional support for Gutchess’ research comes from the University’s new Campus as a Laboratory for Sustainability program. Upon graduation in May, she will begin postdoctoral research at Yale.