Is there really water on Mars?

For m­any ea­rthlings, 2008 was a­ year of too much or too little water. While droughts and floods on this planet kept many people occupied, others had their eyes on the weather forecast millions of miles away, as the Phoenix Mars Lander touched down on our sister planet. 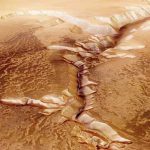 Geographical features such as the Echus Chasam have captured the imaginations of scientists and dreamers for decades. Did Martian water etch these valleys in the planet’s surface?

In the 1800s, human imaginations ran wild as astronomers glimpsed what they took to be canals on the Martian surface. Scientists pondered the possibility of life on the red planet, while artists and dreamers such as H.G. Wells took the notion even further, imagining a Martian conquest of Earth in his 1898 book “War of the Worlds.” As the decades rolled by, scientific discoveries subdued our expectations, but the questions remained: Has Mars ever supported life, and could it ever support human colonies? Both scenarios depend on liquid water.

In 2005, after 14 successful missions to Mars, these questions were still prevalent when ­NASAlaunched the Mars Reconnaissance Orbiter into space. But when scientists compared high-resolution 3-D images of Mars taken by the orbiter to images from 1999, they noticed something unusual. A series of bright, depository streaks had formed in gullies during the intervening years. Since flash floods can carve away soil and leave behind new sediments on Earth, some observers thought they finally had strong evidence that liquid water, and therefore the potential for life, existed on Mars.

Since life as we know it — even the most bizarre varieties — depends on liquid water, scientists assume that it would also be a necessity for extraterrestrial organisms. Mars is replete with water, but most (if not all) of it is in frozen or vapor form. For instance, ice caps the planet’s poles, and patches of ice lie over dunes in craters.

But until the Mars Reconnaissance Orbiter started circling the planet and the Phoenix Mars Lander landed on it, most people assumed that if Mars once had liquid water, it hadn’t for some time. The planet’s atmosphere and temperature make the idea of liquid water seem impossible. The planet is extremely dry, and its distance from the sun keeps the temperature between 22 and -124 degrees Fahrenheit (-5.5 and -86.7 degrees Celsius).

However, liquid water on Mars wouldn’t necessarily be the same as liquid water on Earth. If the water were highly acidic, for example, it would have a lower freezing point and could maintain its liquid state in the chilly climate.