Melbourne’s transport uses 311 billion litres of water each year – equivalent to flooding the city’s centre 8 metres deep. That’s just one of the findings of our study looking at how much water different modes of transport use. 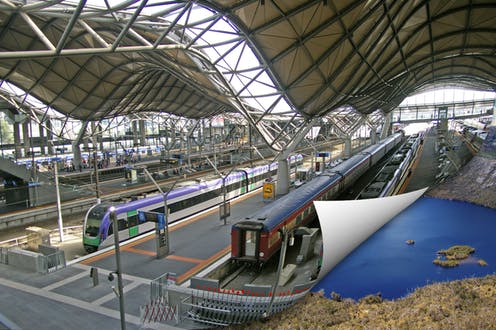 We found that cars are the most water-intensive mode of transport, using on average 6.4 litres of water per passenger, per kilometre. Diesel trains use 5.2L per passenger-kilometre (pkm) and electric trains use the least, at 3.4L per pkm.

This means that a typical commuter can use between 140L and 350L of water per day to travel to work and back. This is at least as much as a Melbourne resident’s daily household water use of 160L.

Water use is thus a significant part of transport sustainability, but it is often ignored in favour of focusing on energy use and greenhouse emissions. So what can we do to stop transport draining our water resources?

How is water used in transport?

Water is needed in nearly all aspects of transport. It’s needed to make cars, to produce fuels, to replace tyres, and to build roads, among other processes.

So the entire supply chain supporting the delivery of passenger transport needs to be considered in evaluating total water use.

To estimate the total water intensities of different transport modes, we used input-output analysis. This statistical technique models the entire economy of a nation or region, capturing the economic transactions between each sector of the economy and another.

The resulting input-output tables are then extended with environmental data that allow us to estimate the environmental intensity of each sector – in this case the amount of water per dollar. Using detailed financial expenditure data for each transport mode, we can figure out how much water is being used.

How much water is Melbourne’s transport using?

Transport in Melbourne is dominated by cars, as in all Australian cities and many others around the world. This is in contrast to urban centres such as Copenhagen, which relies heavily on bikes.

Melbourne does offer a range of public transport systems, including regional and metropolitan trains. These represent the large majority of public transport trips. For these reasons we focused on petrol cars and trains as the main passenger transport modes. The infographic below summarises our findings. 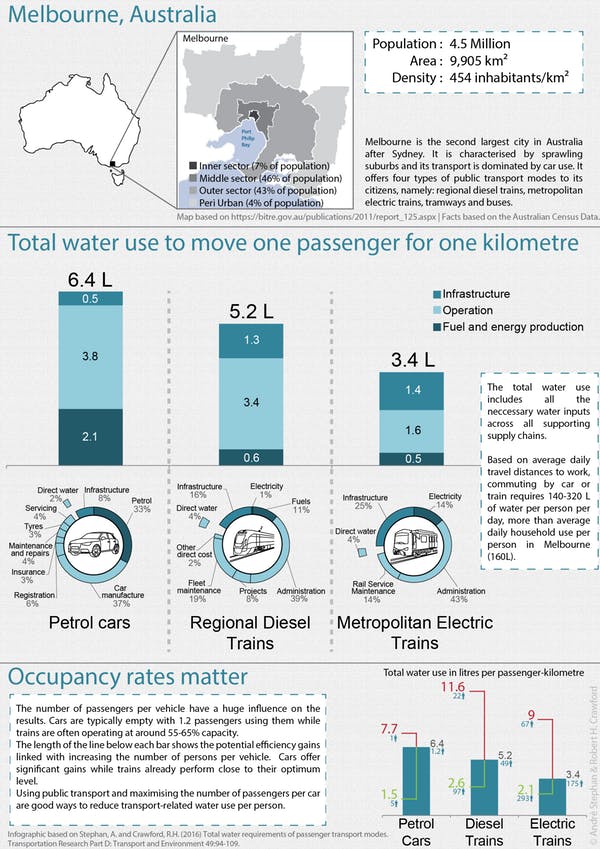 A 50km round trip to work by car requires 320L of water – more than two months of drinking water for a single person. Travelling alone by car is the most water-intensive way to travel.

For train travel, the water use associated with transporting 175 people for 20km in an electric train would be equivalent to having 6cm of water on the floor of the train at arrival. This is equivalent to more than three years worth of drinking water for one person.

You can imagine trains filling up with water relatively quickly throughout the day.

While our study focused on Melbourne, the water intensity of transport modes is also likely to be significant in other cities of Australia and globally. This is because we need a significant amount of water for many manufacturing processes, water supply, electricity generation, fuel production and for other products and services. A study on the water requirements of road vehicles in Finland found similar water intensities for cars and supports this argument.

But it is important to highlight that there is uncertainty in the data. One of the most influential factors is the number of people per vehicle. This is typically very low for cars (around 1.2 people in Melbourne ) and relatively high for trains (around 55-66% full).

This could be improved by car-pooling. We found that if five people travelled together in a car, cars become the most efficient mode of transport. Car-pooling is far from being used at its full potential, but the recent advent of ride-sharing companies can help change this.

However, cars are probably not the best solution as they lead to other negative impacts on the built environment. These include favouring low-density suburban sprawl, air pollution, threatening street life and requiring large costs for infrastructure and land-use.

If this is the case, how can we reduce the water requirements associated with our travel?

Reducing the water requirements associated with passenger transport is a shared responsibility for travellers and transport providers.

There are two main things you can do as a commuter.

First, ditch cars in favour of public transport, which uses less water and resources per person. If public transport isn’t available, make sure your car contains as many passengers as possible.

It could be argued that with more physical activity comes greater need for water and food, which in turn requires huge amounts of water to produce. However, the health benefits of active transport and the resulting savings in public health schemes probably outweigh this additional demand. Some further research is needed to determine whether this is truly the case.

For public transport providers, it is critical to ensure that the entire supply chain is managed better. While water efficiency in administrative buildings is praiseworthy, the majority of the demand occurs further upstream in the supply chain. This can be accomplished through supply chain management. For example, providing incentives for subcontractors and partners to implement integrated water saving strategies.

It is clear that further research is needed to better understand and assess water use associated with transport. More cities and modes of transport need to be assessed to provide a more comprehensive understanding of water use. This will ultimately contribute to reducing our total use of water and help preserve the natural systems on which we depend.