Changes in Sea Saltiness Show Were Affecting the Climate

The question of how human activity affects hurricanes has been much on peoples’ minds lately, for obvious reasons. But the influence of heat-trapping greenhouse gases are far broader than that, and scientists are wrestling on many different fronts with exactly the same issue: can we detect the fingerprint of human activity on any number of climate indicators? 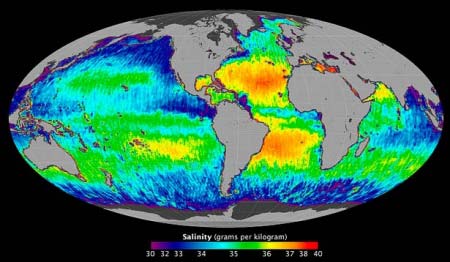 Average salinity near ocean surface,
May 27 to June 2, 2012 as measured by satellite.

Increasingly, the answer is yes. The latest example, published in Geophysical Research Letters, looks at the planet’s hydrological cycle, the evaporation, precipitation and river flow that constantly redistribute water from ocean to sky to ocean. Theory says that global warming should pull more water from the oceans, that rainstorms should become intense in some areas as a result, and that these local deluges should leave other areas drier than they were before. Observations show that this is indeed happening.

But that alone doesn’t prove that humans are the cause; these changes could also, in theory, be natural, caused by changes in the Sun’s brightness, or volcanoes, or other factors. “You always have to make sure natural variability isn’t causing the changes,” said lead author David Pierce, of the Scripps Institution of Oceanography in La Jolla, Calif. “That’s important.”

The new study does just that. By looking at rainfall patterns at sea rather than on land, the authors have been able to show that changes in the hydrological cycle are happening across broad areas of the planet in ways that can’t be explained without invoking human activity.

“We ran 20 different climate models, and with most of them we did runs that included human effects and runs that didn’t,” Pierce said. The runs including human effects — greenhouse gases from fossil-fuel burning, mostly — matched the real-world observations better than the runs without them.

That’s especially significant, Pierce said, because he and his colleagues relied a new generation of climate models developed for the Intergovernmental Panel on Climate Change (IPCC). The U.N.-sponsored body, which distills a vast amount of climate research into major reports issued every five years or so, will be issuing its fifth such assessment starting in 2013.

On land, you measure changes in rainfall patterns with rain gauges; at sea, where evaporating water leaves salt behind and fresh rainwater dilutes the ocean’s saltiness, you do it by measuring salinity.

“We have observations of salinity going back 50 years all over the ocean,” Pierce said. “Huge numbers of scientists would agree that it’s been changing” and earlier studies, including one by co-author Paul Durack, of Lawrence Livermore National Laboratory, had shown similar patterns. But many of those studies had looked at ocean saltiness only at the surface; this new one was based on measurements going down to 2000 feet.

The new study confirms that salinity is rising in some parts of the ocean and falling in others. In the North Atlantic, for example, there has been more evaporation and less rainfall, Pierce said, so that ocean basin is getting saltier.

In the Pacific, the opposite has been happening — in general, anyway. “The North Atlantic has a fairly constant profile, but if you look at the part of the Pacific between Japan and Australia, you see real differences in salinity as you go,” Pierce said.

The advantage of looking in the seas rather than on land is that more than 70 percent of the planet’s surface is covered with ocean. “People have looked at rain gauge measurements, but salinity captures the hydrological cycle at a global scale,” Pierce said. “It’s measured with a completely independent set of instruments, and it’s done by different researchers.”

In other words, if you get the same answer with two entirely different methods it’s more likely to be the right answer.

“For me, the salinity itself isn’t a big deal; it’s the changes in the hydrological cycle, which bring more rains, drought and floods on land,” Pierce said.