Working Wonders Without Water Out West

SEATTLE – In the long rain shadow of the Cascade Mountains, where dryland wheat farmers have eked out livings for more than a century, climate change is very much an issue of the present.

The rain gauge is always in the back of the mind for Mike Nichols, a wheat farmer cultivating 20,0000 acres across two counties in south-central Washington state.

It has to be: Nichols doesn’t irrigate, and with less than six inches of precipitation a year, his wheat crop is already on the edge of what’s considered possible for dryland farming. When drought hits or if, as expected, the West gets drier, his operation will be in trouble. 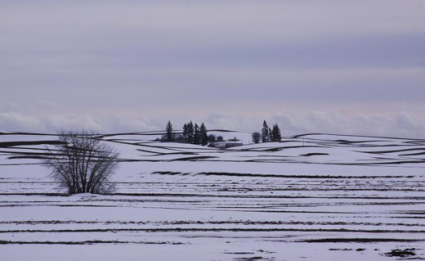 A wheat field outside of Palouse, Wash. is dusted by a January snow. Most of Washington’s wheat crop is watered only with rain falling from the sky – a future facing many farmers across the West as water supplies dwindle and the climate shifts to drier conditions. Credit: Josh Smith/flickr.

“The last eight years have been pretty good,” said Nichols. “But we are putting some [cash] aside, because down the line we know we’re going to go through another drought.”

Although Nichols remains stoic about the potential that climate change could eventually have on his livelihood, his innovative dryland farming methods enable his crops to better handle low moisture conditions.

But there are legions of farmers in the West and Midwest dependent on dwindling aquifers and over-subscribed rivers for irrigation. If today’s drought conditions continue, a whole new generation of growers may join Nichols and return to wholly rain-fed farming.

To cope with Washington’s aridity, Nichols crops on a rotating two-year period, leaving half his fields remaining fallow at any given time. Partly as a result, Nichols currently averages 18 bushels an acre. The average in Washington – where most wheat farms are dryland – is closer to 53 bushels per acre.

Nichols and others like him continue to wring profits from their yields through the practice of extremely efficient farming, using no-tillage methods to preserve moisture and soil, while leaving at least half the ground fallow at any given time.

Such dryland farming practices represent an ever-evolving science, one that the rest of the country may increasingly heed.

Irrigation is increasingly seen as a non-viable alternative in many areas. In Washington state, farmers tapping into the depleted Odessa aquifer may be forced into dryland agriculture to survive. Unless these farmers get permission to recharge such aquifers with waters from the Columbia River, in a decade’s time the Odessa is projected to dry up. 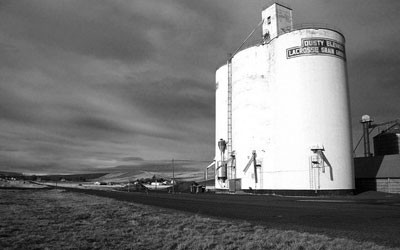 With lower water levels in the Ogallala Aquifer, West Texas cotton farmers are already switching from irrigation to dryland cropping, which could cut their yields by at least half – from about 600 pounds to 300 pounds of cotton per acre.

Dryland farmers save money on irrigation, But other production costs remain about the same even as yields drop, said Jerry Hatfield, laboratory director at the USDA’s National Lab for Agriculture and the Environment in Ames, Iowa. That means an economic hit for growers turning from irrigated to dryland agriculture.

But many farmers don’t have a choice. Some 12 million acres are already under such cultivation in the western U.S. alone, a number set to rise in the near future.

Part of that is water management: Atop the Ogallala aquifer in Texas and eastern Kansas, some groundwater levels have dropped so much that it’s cost prohibitive to pump water to irrigate crops, said Brian Fuchs, a climatologist at the National Drought Mitigation Center at the University of Nebraska at Lincoln.

Farmers there are switching back to traditional crops, like sorghum and wheat more suited to a semi-arid environment.

But part of the transition is due to a changing climate, scientists say. 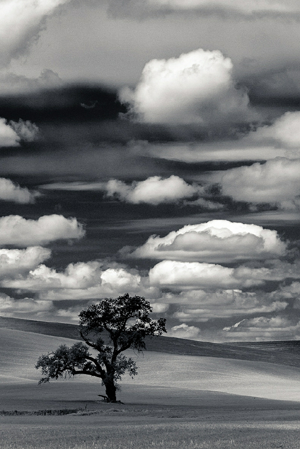 Arizona has been in a drought since the mid-1990s. Farmers around Phoenix, which averages only 8 inches of rainfall a year, continue to produce some of the country’s highest-yielding cotton by flooding their fields with water from a huge local reservoir system. Nancy Selover, Arizona’s state climatologist in Tempe, says that climate change is already eating into mountainous snow packs needed to replenish water reservoirs and aquifers during the state’s long hot summers.

Agriculture experts fear that even dryland growers like Nichols could be squeezed out of the wheat crop altogether.

“It might potentially become too dry for some Washington state farmers to grow anything,” said Bill Schillinger, director of Washington State University’s dryland research station in Lind, Wash.

The economic costs of the switch underway could be considerable. Crop insurance is expected to cover the bulk of the losses from this year’s drought, estimated to run as high as $12 billion. Drought-driven impacts, such as higher food costs and decreased farm incomes, shaved 0.4 percent off the nation’s gross domestic product, dropping the growth rate of the key economic indicator to 1.3 percent from 1.7 percent, according to the Bureau of Economic Analysis (pdf).

“Whether manmade or natural, we know the climate is changing,” said Nichols. “And we’re just kind of rolling with it. If it gets too much drier, we could put in grass for cattle. That wouldn’t be as profitable, but down the line we might just have to.”