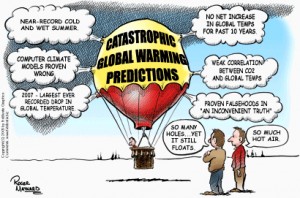 This raises the question of whether or not this recent period of fairly static temperatures represents a termination of the temperature increase that has been occurring for some time and widely considered within the scientific community as resulting from increased greenhouse gases in the atmosphere.

Or is it simply a pause that can be explained in other ways or alternatively the natural variation in the secular trend in temperature increases.

It appears to be the more recent years from the following time series prepared jointly by the Climate Research Unit of East Anglica University, UK and the British Met Office Hadley Centre.

A rebuttal to the Daily Mail David Rose article was immediately written by Dana Nuccitelli, a staff writer for Skeptical Science, and was published by a competing publication: The Guardian. And one particularly interesting graphic in the rebuttal is what was called the escalator which apparently was developed by Skeptical Science.

The position taken in the rebuttal is that one might best think of temperature as a series of periods of increase each followed by a shorter period of no increase or even a slight decline followed by a subsequent major period of increase with yet another short period of flattening or even decline; this pattern repeating and resembling an escalator or stairs.

The explanation of this pattern was not made totally precisely clear analytically but has to do with many different factors including ocean cycles. There is a Pacific Ocean cycle (PDO) that tends to repeat every fifty years (but its duration and intensity is variable) and an Atlantic Ocean Cycle (AMO) with a somewhat longer duration but also variable in length and intensity. 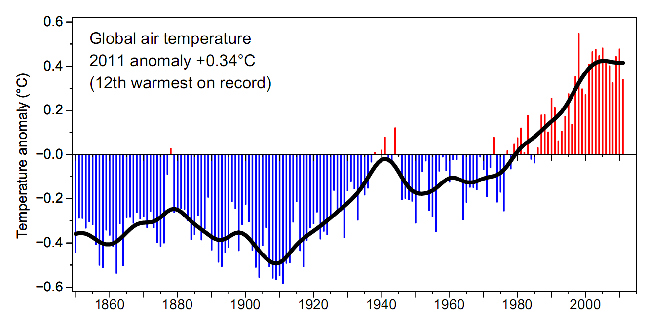 These cycles presumably are due to upwelling of ocean water resulting in cold phases and warm phases of these cycles which are better described as oscillations as they are not regular in length or intensity and have frequent interruptions and changes of phase imbedded in the warm and cold phases of these oscillations probably due to the El Nino/La Nina cycle which is much shorter but also changes in phase for short periods in some cases for unexplained reasons.

Oceans of course represent a very large part of the surface of the earth. So it is not unreasonable that the interaction of these ocean cycles causes this somewhat stepwise increase in temperatures. Sunspot cycles and volcanic activity etc are other variables which can create short-term variations in what might otherwise be a fairly regular upward temperature trend.

A period of 15 years has been suggested By British Met for the average length of the flattening out or slight decline in temperatures. It is not clear exactly how this 15 year duration of flattening is derived but it seems a reasonable number given that the difference in duration of the AMO and PDO might be 15 years. At times they are in perfect synchronization – but this is rare.

The hypothesis that the trend remains intact seems more likely than not but is far from conclusive. Are these flattening out and possibly declining periods adding to the uncertainty of the rate and timing of future temperature increases?

This does not yet suggest that we will cease to see continued increases in temperature – but the confidence intervals may be wider than some think or alternative we might have to think in terms of average temperatures over say a fifteen year averaging period.

Thus what David Rose presented is interesting, but the majority of scientists still project continued and possibly accelerating climate warming. At this point, there has been no credible explanation as to why greenhouse-gas-induced warming would suddenly cease or even reverse.

This period of moderation is likely to be followed fairly soon by a jump in temperature to the next step on the escalator.