Pharmaceuticals in the Water Supply: Is this a threat?

Recent studies by the United States Government Accountability Office and the Environmental Protection Agency found numerous instances of pharmaceuticals in drinking water. According to the GAO, a “study focused on untreated source water used by public drinking water systems” found that 53 of 74 sites tested had at least one pharmaceutical present, and in 2010 the EPA showed that 54 active pharmaceutical ingredients and 10 metabolites, the product of biological changes to a chemical, had been found in treated drinking water. 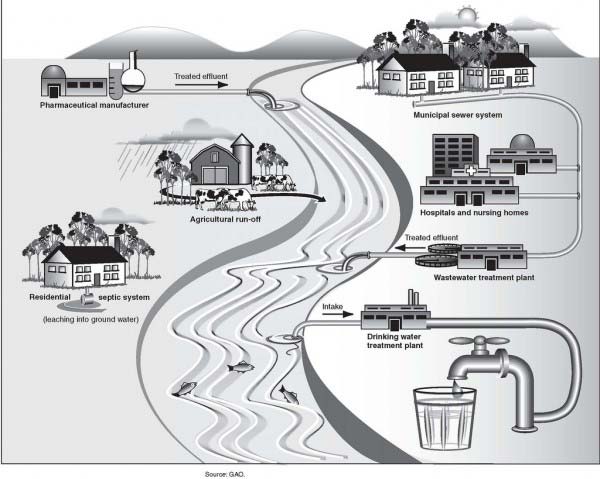 Pharmaceuticals can enter the water supply in a variety of ways. Debates continue over how dangerous this is. Source: GAO

An earlier study from 2005 by the EPA and the Geographical Survey states that 40% of water was contaminated with nonprescription pharmaceuticals, and it has been reported that of the 8 of the 12 most commonly occurring chemicals in drinking water are estrogenic hormones.

Pharmaceuticals can enter the water supply in a variety of ways. Debates continue over how dangerous this is. Source: GAO

It is not so much a case of pharmaceutical drugs being released illegally into the water. As an Associated Press investigation reported in the Huffington Post explains, U.S. manufacturers had legally released about 271 million pounds of pharmaceuticals into waterways as of 2009. In addition, there is not much argument that pharmaceutical ingredients are being passed into waterways either through consumers and hospitals, since when drugs are consumed they aren’t completely absorbed and unused drugs are often flushed, or by the companies themselves.

As Kyla Bennett, an EPA enforcement officer for 10 years, an ecologist and environmental attorney, states, ”It doesn’t pass the straight-face test to say pharmaceutical manufacturers are not emitting any of the compounds they’re creating”. In addition, studies showed that wastewater from drug factories’ sewage plants had significantly more medicine than that of other places. Therefore, the question is instead how dangerous is this situation and how, or if, it should be regulated.

According to this same article, although even low concentrations have been known to harm fish, frogs and other aquatic species, there are currently no “confirmed human risks associated with consuming minute concentrations of drugs” but “experts also agree that dangers cannot be ruled out”. Pharmaceuticals also say that there is no threat, pointing out that active ingredients are profits and it would therefore be counter-intuitive to assume they were throwing them out and that furthermore regulations on other chemicals help ensure that leakage is minimal.

A scientist and the vice president of Pharmaceutical Research and Manufacturers of America’s industry trade group, Alan Goldhammer, adds that while there could be medicinal residues in wastewater, “manufacturers have to be in compliance with all relevant environmental laws… [And] it would not cause any environmental issues because it was not a toxic substance at the level that it was being released”. However, scientists and experts continue to say that they cannot know the dangers for sure and as Dr. Olga Naidenko points out following a study by New York’s Department of Environmental Protection, even though the concentration of each is relatively low, “we cannot be assured that the final mix is safe”.

Essentially, the problems facing federal regulators are that they do not know which, if any, pharmaceuticals are harmful in the low concentrations and that currently very few components of pharmaceuticals are regulated by the EPA. Currently the EPA only regulates lindane and perchlorate, and as a result there is no real standard for any other pharmaceutical drug. Two years ago the EPA did announce another 13 chemicals, hormones, and antibiotics that could potentially be regulated. However, it will take time for testing to be done, and a decision as to whether or not they are sufficiently harmful is not supposed to be reached until next year.