So … do you know what’s in your water?

Would you like your glass of water with a little iron it? Or do you prefer a copper taste? Possibly manganese? Did you realize that there are more than two dozen flavors to water, not all of which are as yummy as say, rocky road ice cream? 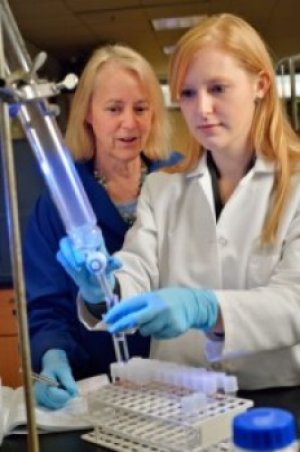 For several decades Andrea Dietrich, who trains utility staff and managers around the U.S. and across the globe on how to use sensory analysis to detect changes in water quality, has worked in the area of assessing taste, odor, and visual perception of chemical elements in water. Dietrich, a professor of civil and environmental engineering at Virginia Tech, has received numerous grants in this area, including one from the National Science Foundation. This $1.6 million contract asked her to investigate connections between corrosion of home plumbing materials, tastes-and-odors in drinking water, economics, and consumer health concerns.

For her research efforts, Dietrich has registered a number of firsts with journal papers reflecting her work on such diverse topics as: improving cancer therapy through odor and taste intervention; prevention and treatment of obesity by drinking more water; health effects of iron and copper in drinking water; and risks to people over 50 for unhealthy over-exposure to iron in water.

So when Amanda Sain of Concord, North Carolina, arrived as an environmental engineering graduate student at Virginia Tech, and she started reaching out to faculty, she found the public health element of Dietrich’s work fascinating. In turn, Dietrich was able to secure funding for Sain’s studies, using resources from the Institute for Critical Technology and Applied Science (ICTAS) and the Water INTERface Laboratory at the Blacksburg, Virginia University.

Sain’s main project with Dietrich has focused primarily on a specific aspect of human health ­- what is the impact of exposure to manganese in water and air. According to the Environmental Protection Agency, manganese is naturally ubiquitous in the environment, and exposure to low levels in one’s diet is nutritionally essential. However, chronic exposure to high levels of manganese by inhalation in humans may result in central nervous systems effects. Children have exhibited some negative neurological impacts correlated with ingestion of manganese.

The EPA does allow a certain level of manganese in drinking water. To consumers, the permitted 0.05 milligrams per liter might seem non-existent. And interestingly, this amount is mostly for “aesthetic” reasons, Sain noted. This contaminant level was set, reportedly “based on bitter metallic taste, black-brown particles in water, and undesirable black or brown color of fixtures and laundry.” But, in actuality, there is not a bitter metallic taste for manganese at that level, Sain and Dietrich revealed in a peer-reviewed journal paper, “Assessing taste and visual perception of Mn (II) and Mn (IV).” Undergraduate researcher Ashley Griffin of Franklin, Tennessee also contributed to the article that appeared in the January 2014 issue of the Journal of the American Water Works Association.

Mineral content in drinking water “is acknowledged to be the major chemical factor affecting taste and likeability of drinking water when no off-flavors are present,” Sain and Dietrich wrote. But the problems occur when a mineral such as manganese is not detected by the human senses. They estimated that 50 percent of the population taste threshold for manganese II, the simplest ionic manganese oxide, to be more than 1000 times the current EPA allowable level. As it is “visually undetectable in drinking water, even at concentrations much greater than those typically found in groundwater…it could lead to ingestion of water with high manganese II concentrations.”

With their findings, Sain and her adviser wondered about doubled contamination — water and air. They posed the question of what happens when one inhales a drinking water that is contaminated with manganese. Suppose the contaminated water is used to operate humidifiers in residential homes. The contaminants theoretically could be more than just the manganese, but they focused on this mineral as a starting point.

If the problem in the drinking water goes undetected, and then it is released into the air via the use of humidifiers, is it indeed a threat? If so, their findings could lead to “informed recommendations for the safe use of humidifiers and open the door to looking at water safety not only in the glass, but in the air as well,” Sain said.

In the early part of 2014, Sain played an investigative role when the National Science Foundation awarded Dietrich a Rapid Response Grant to determine the overall effect of a chemical spill into the Elk River in West Virginia. In that study, they found that the nature of the chemicals that were released into the water subsequently became a problem with the air quality in nearby residents’ homes.