Water is everywhere on our planet. In the air, in our bodies, in our food and in our breath. Without it life as we know it would not be possible. Water is vital for the survival of all living things, yet as a molecule it has some pretty odd behaviour. Water molecules stick to each other, forming the ‘skin’ on ponds and droplets. The solid form floats on the liquid form. At room temperature water is a liquid, when most of the molecules closely related to it are gasses.

Why does water have so many strange and wonderful properties? What is it about this rather tiny and innocuous molecule that makes it so important for life?

To answer that you have to look at the actual structure of the molecule, exploring a world far, far smaller than microbiology usually goes. The properties of water are determined by the forces that hold it together. 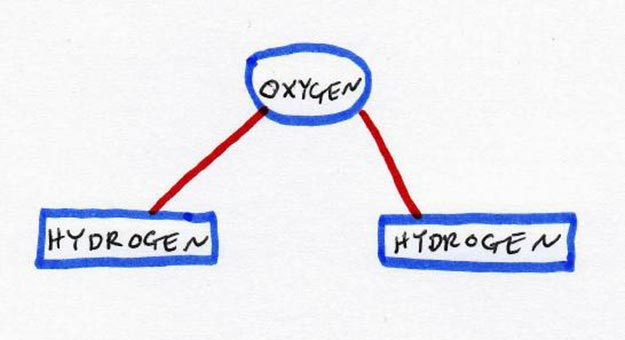 A stylised diagram of a water molecule. All diagrams in this post (c) me.

The above diagram shows a water molecule, H2O. Two atoms of hydrogen attached to one molecule of oxgyen sharing electrons between them to form bonds. But the red lines that I’ve used to show the bonds hide a far more complicated story. This may be a bond, but it is not a very equal one because while oxgyen is a nice reasonably sized molecule, with eight electrons surrounding each atom, hydrogen is tiny. It only has one electron!

A *very* stylised diagram of oxygen and hydrogen atoms with protons in purple, neutrons in pink and electrons in yellow. Physicsts and chemists are not to complain about the simplistic inaccuracies in it!

So when the oxygen and hydrogen form a bond, it is not a relationship of equals. The poor little hydrogen electron can’t really be part of the bond and also properly surround the hydrogen nucleus (quantum does help, but not enough). As a result the oxygen atom is nicely padded with surrounding electrons while the hydrogen atom is practically naked on one side. 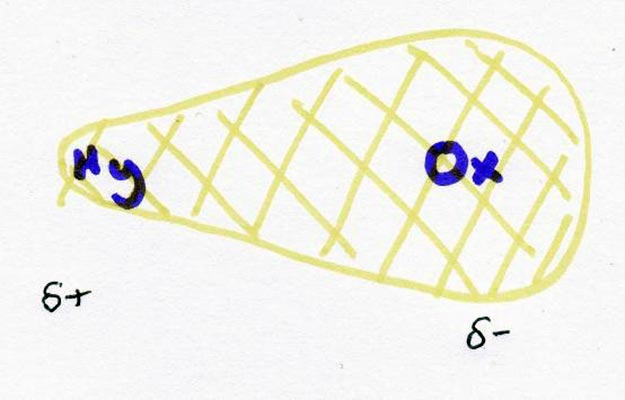 Diagram showing the electron distribution around hydrogen and oxygen in a bond. The purple letters are the respective nuclei and the yellow cross-hatches represent the area where electrons are likely to be found.

The little “delta plus” and “delta minus” at the bottom show that a small charge is generated across the bond. It’s only small, but it is still big enough that there is a small positive centre at the hydrogen. Positive centres tend to attract negative charge. And where are the negative charges in H2O? 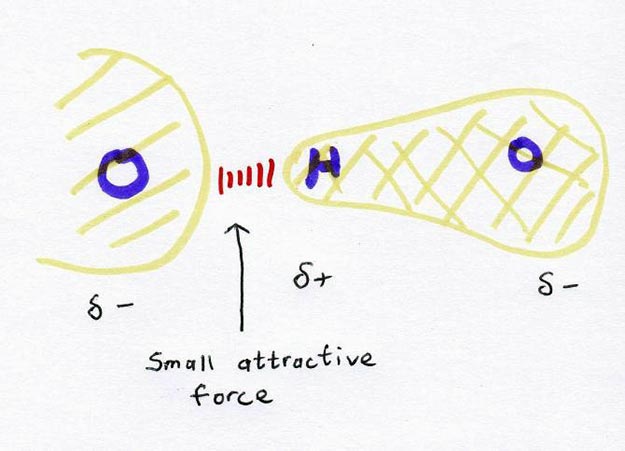 I love it when chemistry all fits together :p The red vertical lines show the attractive force between the electron-rich oxygen of one water molecule and the electron-poor hydrogen of another.

This small attracting force is called a hydrogen-bond, and although it is quite weak compared to other bonds it’s strong enough to make a significant difference. For example to the boiling temperature. This extra forces holding the water molecules together means that water stays liquid at room temperature whereas other very similar molecules that don’t form hydrogen bonds are gaseous. This is why life on earth is water based rather than, say, hydrogen sulfide based. These hydrogen bonds also affect the solid structure of water – the bonds become more rigid as water freezes, giving ice a more open and less dense overall structure. These properties explain why ice floats on water, and how goldfish can survive at the bottom of a frozen pond over the winter.

The presence of hydrogen bonds also makes water molecules more ‘sticky’ or in scientific terms cohesive and adhesive. The small charges on the water molecules allows them to stick together which is why water has a ‘skin’ that small insects can walk on, and also explains why water can be sucked up a straw so easily. It’s not just straws either, plants draw water up from their roots to the top of the highest leaves without any kind of pumping mechanism. They rely on the ability of water to form a thin unbroken tube, all the way up the length of the trunk.
I still think trees must have a secret pump somewhere… 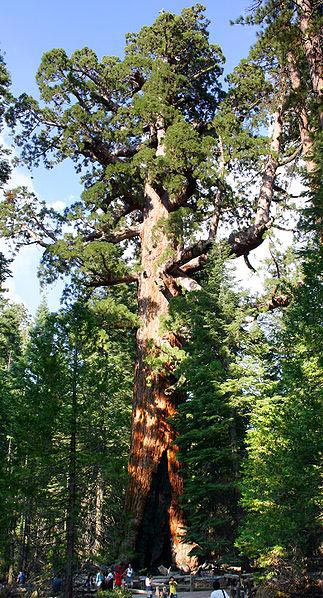 Above: an unbroken water column over 60 metres high, surrounded by a tree. Note the people at the bottom for scale. Image taken from wikimedia commons.

Hydrogen bonds are a great example of why I love the ‘chemistry’ part of biochemistry so much. From the tiny world of the nucleus and the principles of intercellular forces the properties of larger and complex organisms can be built up. From the tiny elecrogen-low nucleus of hydrogen we get an explanation how plants get water to the leaves, and how fish survive over winter. I find that amazing!