Some 300,000 West Virginians have endured severe water restrictions thanks to a chemical spill in the Elk River, triggering an ongoing environmental investigation. 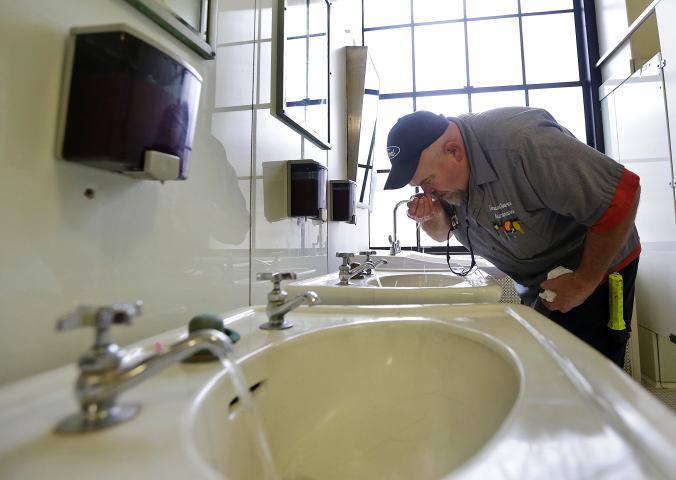 Al Jones of the West Virginia Department of General Services tests the water in a restroom in Charleston’s State Capitol on January 13, 2014.

Although the 4-methylcyclohexane methanol (MCMH) spilled into the river is not a typical environmental contaminant, the 5,000 gallons lost in the incident have lessons to teach, say experts, about our vulnerable and aging water infrastructure.

To find out more, National Geographic spoke with Tom Curtis, the deputy executive director of the American Water Works Association, a water industry trade group based in Washington, D.C.

Are there any lessons we can learn from the recent chemical spill and resulting drinking water ban in West Virginia?

I have no doubt there are lessons we might learn. It’s probably too early to know what those are, and we need to know more about what happened. But one thing is that the chemical involved was not listed as hazardous waste by the EPA or the state, and that would appear to be wrong in hindsight.

Had it been listed as hazardous waste, a number of federal and state laws would have come into play, specifying things like how quickly, and to whom, notifications have to be made; how quickly a leak has to be contained; and how monitoring is handled.

The utility involved in the spill in Charleston—West Virginia American Water—says they had a backup carbon filter system that had gotten overwhelmed by the volume of MCMH. How common are these carbon filters on utility systems, and could they be improved?

Virtually every water system in the U.S. filters its water, with only a handful of exceptions that have protected watersheds and that have been granted an exemption by the EPA for the filtration requirement. Every other city, including Charleston, filters its water supply. That filtering doesn’t always involve carbon; it can be other filter media, typically layers of different things like sand and certain polymers. Engineers design a filter medium that is most effective at removing what’s in that particular water.

West Virginia American Water said that they had not been testing for MCMH before the spill because it is rare and because they can’t afford to test for every single chemical. Is there work being done to start doing that?

This gets into an interesting area: How much do customers want to spend for things that are a theoretical risk, and may be a very small theoretical risk? Utilities are required to constantly test for 91 parameters, according to the Safe Drinking Water Act, which is regulated by the EPA.

That includes lots of things that are known to be in water and are known to be harmful, like bacteria and byproducts of disinfection. Utilities are required to disinfect with chlorine or ozone, and those chemicals can react with things naturally in water to produce byproducts, so they test for that.

Utilities may not have to test for something that has never been in their water and for which they have no reason to believe that it is. For example, there is a herbicide that is only used for growing pineapples. They test for it in Hawaii and California, but they don’t need to test for that in West Virginia because no one is growing pineapples there.

There are about 50,000 chemicals in commercial use in the U.S. in some quantity. At some cost, I suppose you could design a testing scheme for all of those, but it would be extraordinarily expensive and you would be testing for lots of things that aren’t there. A test can cost up to a couple hundred dollars for one sample for one chemical.

You do want to err on the side of protecting public health, but you don’t want to give people very high water bills.

How common are drinking water bans or advisories?

There is a range of advisories. It is extraordinarily rare to advise people that they can’t use their water for any purpose; [the West Virginia ban was] the first I’ve seen in working here 15 years.

What’s not so rare are more local advisories not to use water at a certain time during maintenance.

Sometimes utilities issue a boiled water advisory. They’ll do it, but they don’t want to do it needlessly because when you tell hundreds of thousands of people to boil water, someone is going to get hurt. Someone is going to have a scald injury, or a child is going to pull hot water on his or her little head.

What utilities do can have an immediate impact on the community. Without water you don’t have sanitation, public health, fire protection, or an economy. It’s a big job and an important job.

Has the 1972 Clean Water Act made a difference to drinking water supplies?

One hears gloomy reports on the billions of dollars that supposedly need to be spent on U.S. water infrastructure. Is that true?

I would replace billions with trillions—then that’s absolutely true. In spring 2012 we produced a report, “Buried No Longer,” that estimated that over the next 25 years, the country probably needs to spend about $1 trillion on drinking water infrastructure, and another $1 trillion on wastewater.

It’s not that anyone has done anything wrong, but pipes are getting older. Those of us alive now didn’t buy those pipes; our parents and grandparents paid for those pipes. Water systems were built out substantially in the 1920s and then again after World War II. They last a very long time, but they’re not immortal.

We also know that some of the newer pipe doesn’t last as long. Pipe that was laid down in 1960, say, might only have a 60-year life span, while pipe from 1920 had a 100-year lifespan, but both are coming due at the same time. Some of the oldest pipe is the best pipe because it was built before people knew how to calculate things, so they overbuilt by a big factor. Some 1850s cast iron pipe was two inches thick, and that may never wear out.

Fixing infrastructure is often politically unpopular, so how do we get around that?

This is something that every water professional struggles with. For some reason that people can’t explain well, people have a mindset that water should be free or very low cost. It’s ironic to see people willing to pay much more for cable TV, premium channels, cell phone service, or bottled water, which is very expensive per gallon. They make those purchases without batting an eye, but they don’t want to see their water bill go up.

I’ve never seen an adequate explanation for why that is. Some say it harkens back to a memory when people lived on the farm and you had a well or dipped out of the river and water was free, but others say cable and cell phones are optional but with water you don’t have a choice, so you resent paying for it.

But that’s what has to be done; your community has to raise the money yourself. We have a proposal to help make it easier: a very low-interest federal loan program that we are hoping to sell Congress on to reduce the cost of financing infrastructure.

Some people have said that privatizing water systems has led to more boil advisories, as happened in Atlanta a few years ago.

What is the current state of that movement?

Across the U.S. about 15 percent of community water systems are private, and about 85 percent are public. I’d be surprised if there’s very much more privatization of whole water utilities in the U.S., though it’s not off the table necessarily. Atlanta was an experiment that most people in the water business think failed. Atlanta bought back the system after people were unhappy with the service.

The privatization movement has changed to a spectrum of options. There is a lot of innovation with U.S. utilities starting to outsource some of what they do to private entities or other public utilities.

For example, the Lehigh County Authority in Pennsylvania signed a 50-year agreement to run water for the city of Allentown, which is in the county but had its own system. That is not privatization, but the city contracted out to the county and got efficiency and savings.

Some utilities say, “I’ll let someone else do my billing because they can do it more efficiently.” There are lots of ways things can be outsourced or done collectively to operate in a more efficient manner. Seattle had to build a new water treatment plant a few years ago. Rather than the city owning and operating it, they took bids and awarded a contract to a company. After 50 years the company will have to sell the facility to the city for $1.

Couldn’t a critic say they wouldn’t want to drink water provided by the lowest bidder?

The quality of water was specified in the contract; it had to meet or exceed every standard. It’s a more businesslike way to solve a problem.