Suresh Ponnusami sat back on his porch by the road south of the Indian textile town of Tirupur. He was not rich, but for the owner of a two-acre farm in the backwoods of a developing country he was doing rather well. He had a TV, a car, and a maid to bring him drinks and ensure his traditional white Indian robes were freshly laundered every morning. 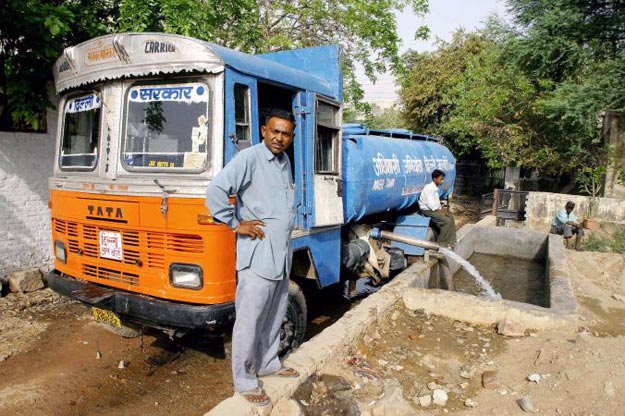 Pumping and shipping groundwater in New Delhi and elsewhere in India has become big business, but water table levels are dropping.

The source of his wealth, he said, was a large water reservoir beside his house. And as we chatted, a tanker drew up on the road. The driver dropped a large pipe from his vehicle into the reservoir and began sucking up the contents.

Ponnusami explained: “I no longer grow crops, I farm water. The tankers come about ten times a day. I don’t have to do anything except keep my reservoir full.” To do that, he had drilled boreholes deep into the rocks beneath his fields, and inserted pumps that brought water to the surface 24 hours a day. He sold every tanker load for about four dollars. “It’s a good living, and it’s risk-free,” he said. “While the water lasts.”

A neighbor told me she does the same thing. Water mining was the local industry. But, she said, “every day the water is reducing. We drilled two new boreholes a few weeks ago and one has already failed.”

Surely this is madness, I suggested. Why not go back to real farming before the wells run dry? “If everybody did that, it would be well and good,” she agreed. “But they don’t. We are all trying to make as much money as we can before the water runs out.”

Ponnusami and his neighbors were selling water to dyeing and bleaching factories in Tirupur. The factories once got their water from a giant reservoir on southern India’s biggest river, the Kaveri (see picture). But the Kaveri was now being pumped dry by farmers and industry farther upstream. The reservoir was nearly empty most of the year. So the factories had taken to buying up underground water from local farmers.

It is a trade that is growing all over India—and all over the world.

We are used to thinking of water as a renewable resource. However much we waste and abuse it, the rains will come again and the rivers and reservoirs will refill. Except during droughts, this is true for water at the surface. But not underground. As we pump more and more rivers dry, the world is increasingly dependent on subterranean water. That is water stored by nature in the pores of rocks, often for thousands of years, before we began to tap it with our drills and pumps.

We are emptying these giant natural reservoirs far faster than the rains can refill them. The water tables are falling, the wells have to be dug ever deeper, and the pumps must be ever bigger. We are mining water now that should be the birthright of future generations.

In India, the water is being taken for industry, for cities, and especially for agriculture. Once a country of widespread famine, India has seen an agricultural revolution in the past half century. India now produces enough food to feed all its people; the fact that many Indians still go hungry today is an economic and political puzzle, because the country exports rice.

But that may not last. Researchers estimate that a quarter of India’s food is irrigated with underground water that nature is not replacing. The revolution is living on borrowed water and borrowed time. Who will feed India when the water runs out?

Nobody knows how much water is buried beneath our feet. But we do know that the reserves are being emptied. The crisis is global and growing, but remains largely out of sight and out of mind.