Given that approximately one sixth of the world’s population lacks access to safe drinking water, it would obviously be a very good idea to create something that allows those people to easily and cheaply filter their local tainted water. That was the thinking behind the LifeStraw. 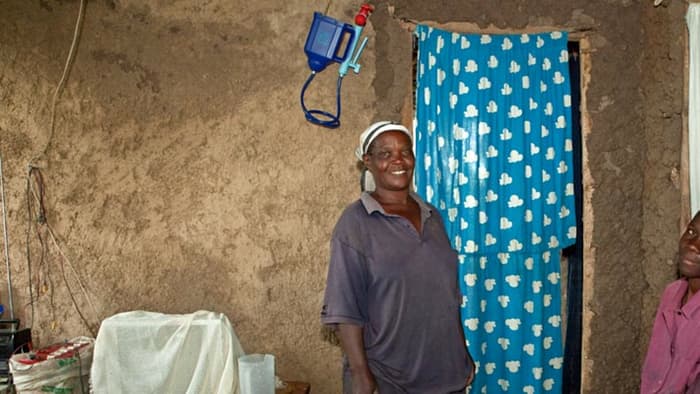 Developed by European disease control firm Vestergaard Frandsen, the simple device allows individual users to drink directly out of unclean water bodies, without ingesting pathogens or other pollutants. Now, the larger-scale LifeStraw Family is being introduced in Kenya, where it could potentially save millions of lives, reduce air pollution, and pay for itself in the process.

The LifeStraw Family is kept in the home and hung on a wall, where tainted water is transported to it. Each unit is capable of filtering up to 18,000 liters (4,755 U.S. gallons) of water, which is said to be enough to meet the needs of a family of five, for up to three years. The device is claimed to filter out at least 99.999 percent of bacteria, protozoa, viruses, and parasites.Originally, the first-generation LifeStraw used a special resin to kill water-borne bacteria on contact, while activated carbon captured organisms such as parasites. Now, both it and the LifeStraw Family instead utilize hollow fiber technology.

The filtration process starts with users emptying untreated water into the device’s feed bucket, where a prefilter traps particles larger than 80 microns. From there, the water proceeds down a plastic hose to the purification cartridge. There, a hollow fiber ultrafiltration membrane stops all microbes and fine dirt particles – the fibers’ tiny pores won’t allow anything larger than 20 nanometers to pass through. What ultimately comes out of the cartridge’s tap is clean, clear, potable water.

The “dirty side” of the membrane can be periodically cleaned via a built-in back-flushing system, although small amounts of chlorine are also added as the water leaves the feed bucket, to help reduce biofouling.

As part of its ongoing Carbon for Water program, Vestergaard Frandsen is in the process of supplying 90 percent of the homes in Western Province, Kenya, with 900,000 of the filters, along with training in how to use them. The program should allow approximately 4.5 million Kenyans access to drinking water that meets EPA standards, for the first time.Traditionally, people in the region have set about purifying their water by boiling it. Heating that water requires fire, fire produces smoke, and smoke is a major source of atmospheric carbon dioxide. Because the LifeStraw Family reduces the need for those fires, Vestergaard Frandsen is able to claim one carbon credit for each metric ton of CO2 that is kept out of the atmosphere. The company can then sell those credits on the open market, mostly to corporations that wish to meet their Kyoto Protocol obligations by supporting non-polluting technology, instead of reducing their own emissions.

In this way, the program should hopefully pay for itself, and then some. Vestergaard Frandsen has invested approximately US$30 million in the project, but it expects to offset over 2.4 million tons of CO2 per year – carbon credits sell for about US$6 to $12 each. A database of families using the devices, which includes photos, phone numbers and GPS coordinates, will be utilized for auditing purposes.

Eliminating the need for water-boiling fires also lessens the amount of harmful smoke that users inhale, along with the amount of time and effort needed to gather wood, plus it slows the deforestation process.

The implementation phase of Carbon for Water is just wrapping up, having taken place over the past two months. All of the LifeStraw Family recipients are getting their devices free of charge, and will receive free repairs or replacements at one of 31 service centers that have been established in the region.