Scientists at Stanford have developed a battery that uses nanotechnology to create electricity from the difference in salt content between fresh water and sea water. The researchers hope to use the technology to create power plants where fresh-water rivers flow into the ocean. The new “mixing entropy” battery alternately immerses its electrodes in river water and sea water to produce the electrical power. 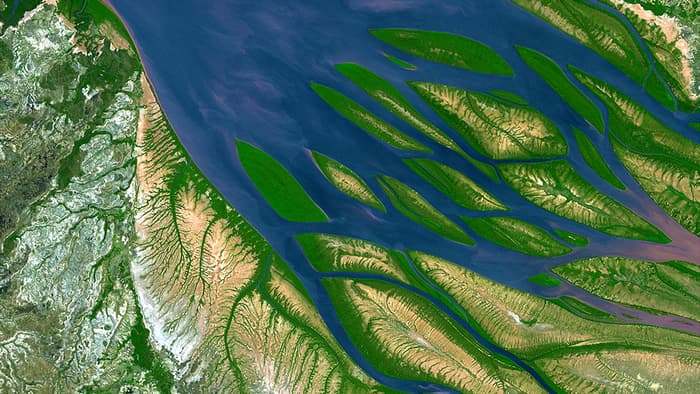 Making electricity from the difference in salinity (the amount of salt) in fresh water and sea water is not a new concept. We’ve previously covered salinity power technology, and Norway’s Statkraft has built a working prototype power plant. But the Stanford team, led by associate professor of materials science and engineering Yi Cui, believes their method is more efficient, and can be built more cheaply.

Other fresh/salt water power plants work by releasing energy through osmosis (the passing of solvent molecules through a membrane). The Stanford team’s approach harnesses entropic energy from the interaction of the fresh water and salt water with the battery’s electrodes.

The mixing entropy battery works by exchanging the electrolyte (a liquid that contains ions or electrically charged particles – in this case water) between when the battery is charged and when it is discharged. The ions in water are sodium and chlorine, which are the elements of ordinary table salt. The saltier the water is, the more sodium and chlorine ions there are, and the more voltage that can be produced.

The battery is first filled with fresh water and charged. Then the fresh water is swapped out for salt water. Because salt water has 60 to 100 times more ions than fresh water, the electrical potential is increased and the battery can discharge at a higher voltage, providing more electricity.

After the battery is discharged, the salt water is drained and fresh water is added to begin the cycle again.

To enhance the efficiency of the battery, the positive electrode is made from nanoscale rods of manganese dioxide. The negative electrode is made of silver. The design of the nanorods provides about 100 times more surface area for interaction with the sodium ions compared to other materials, and allow the ions to move in and out of the electrode more easily. The Stanford team reports a 74 percent efficiency in converting the potential energy in the battery to electricity. Cui believes that with further development the battery could achieve up to 85 percent efficiency.

The Stanford team has calculated that with 50 cubic meters (more than 13,000 gallons) of fresh water per second, a power plant based on this technology could produce up to 100 megawatts of power. That is enough electricity to support about 100,000 households. 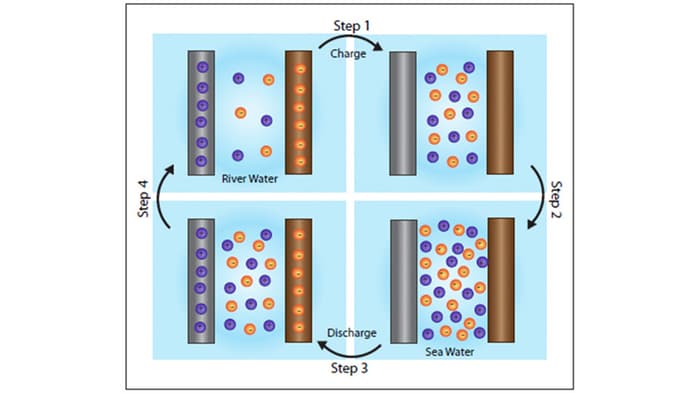 While salt water is plentiful in the ocean, the volume of fresh water required suggests that a good location for a mixing entropy battery power plant would be where a river flows into the ocean. Because river deltas and estuaries are sensitive environments, the Stanford team designed their battery to have minimal ecological impact. The system would detour some of a river’s flow to produce power, before returning the water to the ocean. The discharge water would be a mix of river water and sea water, and released into an area where the two waters already meet.

In fact, the fresh water doesn’t have to come from a river. Cui says that storm runoff, gray water, or even treated sewage water could potentially be used. As an added benefit, the mixing entropy process can be reversed to produce drinking water by removing salt from ocean water.

The Stanford scientists are currently working on modifications to get the battery ready for commercial production. For example, the silver electrode is very expensive, and they hope to develop a cheaper alternative. Because the mixing entropy battery is simple to make and produces energy efficiently, the team hopes that their technology can become a significant source of renewable energy in the future.

The team’s results have been published in the American Chemical Society Nano Letters journal.