Antarctica normally conjures images of white and blue, but the frozen continent can sometimes bear more unexpected colours. Take the Taylor Glacier – when geologist Griffith Taylor first explored it a century ago, he found a bizarre reddish stain that seemed to spill waterfall-like from the glacier’s snout. The area became evocatively known as Blood Falls.

The source of the blood-red colour is an underground saltwater lake that was trapped by the encroaching glacier at least 1.5 million years ago. The temperature of the water is -5 Celsius, but it’s so salty that it doesn’t freeze. It’s also rich in iron salts, which are slowly leaching the ice – these are the source of the distinctive red hue. Blood Falls is a rust glacier.

But it also houses another secret, which scientists from Harvard University have started to uncover – it’s home to an entire ecosystem of bacteria, trapped for millennia in conditions that could hardly be more inhospitable to life.

Neither water from the surface nor light from the sun penetrates the thick ice of Taylor Glacier to the lake lying 400 metres beneath. As the glacier slides overhead, trace amounts of gases might seep through, but nothing substantial. There’s hardly any oxygen dissolved in the water, and radioactive-dating of the little carbon suggests that it is incredibly old. But despite the extremely salty water and the lack of light, oxygen and carbon, the microbes have lived there for millions of years, using sulphate ions as their only source of energy.

Jill Mikucki from Harvard University discovered life in Blood Falls a few years ago. It took her several years to get a sample of water from it, but when she did so, an analysis of its chemical composition revealed that its bacterial community have lived a truly sheltered existence. For millennia, the Blood Falls bacteria have been trapped underground with no nutrients coming in from the outside world. How do they survive? Again, the water provides a clue. It’s very rich in sulphate ions (SO42-), which many bacteria can use as an energy source.

That seemed like a plausible explanation for the bacteria’s survival, but something didn’t add up. Bacteria typically subsist off sulphate ions through a chemical reaction that converts them into sulphide ions (S2-). These can usually be detected as hydrogen sulphide, but Mikucki couldn’t find any hydrogen sulphide in the water. And in the genomes of the bacteria, she couldn’t find any traces of the group of genes (dsrA) that would normally catalyse this reaction. She even found, by analysing the proportion of different sulphur isotopes, that the overall levels of sulphate ions in the water hadn’t fallen for millions of years.

The bacteria must have some way of recycling their energy source. Mikucki suggests that they do so using a unique system, where they reduce sulphate to sulphite (SO32-) instead. The sulphite then reacts with iron (which the glacier scours from the underlying rock), and is oxidised back into sulphate, replenishing the original supply. The bacteria do this with a special enzyme called PAPS, or phosphoadenosine-5′-phosphosulphate-reductase, to give it its fuller, catchier name! 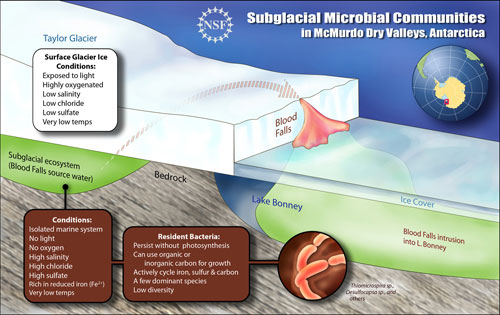 This system may be unique, but that’s only because life beneath glaciers has hardly been studied. Perhaps such ecosystems were commonplace during Snowball Earth periods when much of the planet was covered in ice. And perhaps many similar communities exist elsewhere beneath the planet’s glaciers. After all, Mikucki notes that iron is such an abundant part of the Earth’s crust that it’s entirely possible that other bacterial ecosystems have adapted to survive on little else besides it and sulphate ions.