Waking up to America’s water challenges

The US is experiencing unprecedented droughts and water shortages. What to do?

For someone in the United States who is used to unlimited and practically free access to tap water at any time, until recently, the idea of a water crisis likely conjured up images from far away places.

In the last few years, however, the issue of water has come home to America: from unprecedented droughts in Texas and California, to shortages in Atlanta, to turning off the tap to thousands of residents of Detroit who couldn’t pay their water bills. Now the question is: What do we do about it?

Last week, more than 90 experts from industry, academia, environmental state agencies and the non-profit world met at Columbia University for the first annual “America’s Water” event, organized by the Columbia Water Center and sponsored by the PepsiCo Foundation, to discuss crises and opportunities and to develop a future plan for collaboration. The America’s Water initiative aims to build a network of experts across sectors to develop a research agenda that will inform water infrastructure improvements in the United States through innovative management solutions, new technologies and new policies.

In his introduction, Upmanu Lall, director of the Columbia Water Center, laid out in stark terms the nature of America’s water challenges, from increasing risks from drought and floods to rapidly decaying infrastructure. But, he said, there are also significant opportunities, not just to solve our own problems but to create innovations that could help the rest of the world as well. “How can we tap the implicit opportunity for transforming water in the U.S.? We must develop an example here for the world,” Lall said.

“Will it take another Dustbowl for Americans to start paying attention to water issues?” asked Lall in response to an audience question. Or will it be the chance to create the “iPhone technology” of water? Whether the impetus is crisis or opportunity, according to Lall, the time to act is now.

In his keynote address that followed, Dan Bena, senior director of operations development at PepsiCo, echoed Lall’s points and urged that we must also “make water personal” if we are to engage the public for meaningful change.

Beginning with the United Nations 2010 resolution recognizing the human right to water, Bena pointed out that many of the criteria the UN used to define the right to water—including that water be safe, sufficient, physically accessible, affordable and acceptable—are threatened not just around the world, but in the United States as well. For example, Bena said, in California, 1 in 10 people are now at risk of exposure to harmful levels of nitrates in their water, while in Detroit, 26,000 households recently found themselves without water when they couldn’t afford to pay hundreds of dollars in water bills.

“We are changing global carbon, nitrogen and water cycles,” Bena said. Large multinational companies like PepsiCo have both a responsibility and a unique opportunity to address the water crisis, Bena added. He emphasized the importance of public commitments from businesses to drive innovation. One example from Pepsi is the development of “I-crop,” a web-based precision irrigation system that in 2013 helped Pepsi-affiliated growers in water-stressed areas save 31 percent of the water they would have normally used.

Panel speakers in later sessions delved into more detail about the complex and interconnected nature of America’s water challenges. Vince Tidwell, distinguished member of the technical staff at Sandia National Laboratories, discussed the close connection between energy production and water, pointing out that the energy sector withdraws more water than any other sector, and that energy production (including shale oil production and thermoelectric cooling) is already being affected by water scarcity in many places. “Water touches every single part of the energy cycle,” Tidwell said. In the future, Tidwell added, thermoelectric plants will need to use more and more “non-traditional” sources of water, such as wastewater or brackish water to cool their operations. At the same time, a different energy mix can make a big difference in total water consumption—renewables, for example, usually consume far less water than other sources. 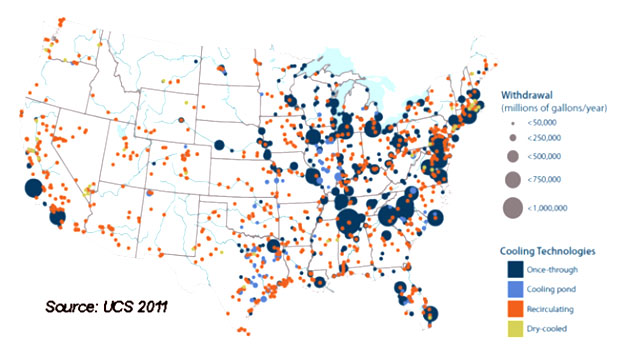 America’s decaying water infrastructure adds another dimension to the crisis, according to John Young, utility management consultant and former president of American Water Services. In the 1970s and ’80s, Young said, increasing environmental regulations led to big investments in water treatment, to the detriment of more basic water delivery infrastructure. “Where do we spend our money on water infrastructure?” Young asked. “Are we going to invest to increase capacity, or reduce reliability?”

Meanwhile, Lawrence Susskind, MIT professor of urban planning and mediation, expressed the need for new approaches to local engagement on water issues. “How do people sitting under the tent engage in problem solving instead of being just recipients of information?” he asked. “You can’t find a way forward [on water] without civil society.” He put forward five ideas that need to be addressed to make progress on collaborative problem-solving, including recognizing that dialogue alone is not problem-solving, coming up with new systems of informal representation for ad hoc problem solving, developing new approaches to problem fact-finding, bringing in neutral facilitators, and developing new forums for informal problem-solving.

On the legal side, Adam Schempp of the Environmental Law Institute discussed the tangled web of water laws across the country that make solving any water problem challenging. Federal rules that govern water quality and state laws that govern quantity vary dramatically from East to West and whether one is talking about surface or groundwater.

On the technical side, numerous workshop participants expressed hope that new, disruptive technologies combined with policy changes could shift the entire water infrastructure paradigm, moving away from high-cost, capital-intensive approaches to a more distributed system in which water is captured, treated and reused at the source—akin to the direction many energy experts believe the electric grid is going.

Upmanu Lall discussed the potential of recently developed graphine filters: “If you could make them work, you could filter water at the molecular level for very low energy cost,” he said, adding that water tech is a rapidly rising industry.

Part of the problem up to now, Clerico argued, is that the developed world has been building and operating its water infrastructure on a linear model that dates back to Roman times. “Water infrastructure in the future will look more like a tree than a Roman aqueduct,” making it more resilient, regenerative, adaptive to its environment and beautiful. “Large and linear must become small and resource-oriented,” he added, with designs that address not just water but carbon and nutrients.

Nancy Stoner of the Pisces Foundation agreed that already-existing technologies offered great hope for solving water problems, especially those that approach the problem from a local, integrated water management approach, including green infrastructure, water reuse, energy harvesting from sewage and other technologies. We need to “look holistically and look long-term,” she said.

However, Stoner also expressed a view that seemed to be held by most of the participants: that while technical solutions exist, the real problem is society’s inability to prioritize water to make the governance, policy and social changes necessary to drive the transformation needed.

According to a number of participants, at the heart of these problems is the lack of a meaningful way to establish a value—or price—for water. “Technology without price will not work,” said Marc Robert, chief operating officer of Water Asset Management. “Americans are spoiled children” when it comes to paying for water. “You need price to justify investments. Attractiveness of capital is how you get things done.”

These take-homes were echoed later in working-group breakout sessions, when groups representing technology, utilities, policy and investors and others gathered for a collective brainstorming session on what the biggest opportunities and challenges were for America’s Water. The Columbia Water Center team will collect the results of those sessions to create a working document and ongoing dialogue among participants in hopes of developing collaborative, implementable solutions.

In closing comments at the end of the day, Michael Deane, Executive Director of the National Association of Water Companies, spoke of the need to get past widespread “institutional inertia … the inability to to move or get any sense of momentum in our institutions of governance.” Nevertheless, he said, he is an optimist who sees progress happening in various places around the country–usually through the efforts of a mayor or other strong local leader. And, he added, “just as it takes a local leader, America’s Water has the opportunity to take a national leadership role,” to move the conversation forward for truly sustainable solutions.

Through it all, those who work on water issues shouldn’t forget the human dimension of the problem and the need to communicate the urgency of water issues of the public. This was the message of Carl Ganter, the director of Circle of Blue, a website dedicated to reporting on national and global water issues.

Speaking during the event’s lunch break, Ganter expressed the frustrations of journalists who struggle to compete with sensational but trivial news to report on critical issues such as water.

“How do we create the unified story and make the complexities of water simple,” he asked, especially when people prefer less frightening, more optimistic stories? “We have to use the inflection points,” he said, such as the drought in California, which is likely to get much worse by summer, and then turn it around for an optimistic message: “We can do this.”