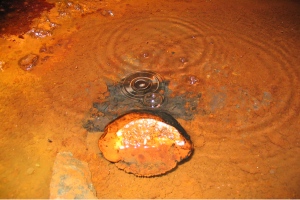 Scientists working 2.4 kilometres below Earth’s surface in a Canadian mine have tapped a source of water that has remained isolated for at least a billion years. The researchers say they do not yet know whether anything has been living in it all this time, but the water contains high levels of methane and hydrogen — the right stuff to support life.

Micrometre-scale pockets in minerals billions of years old can hold water that was trapped during the minerals’ formation. But no source of free-flowing water passing through interconnected cracks or pores in Earth’s crust has previously been shown to have stayed isolated for more than tens of millions of years.

“We were expecting these fluids to be possibly tens, perhaps even hundreds of millions of years of age,” says Chris Ballentine, a geochemist at the University of Manchester, UK. He and his team carefully captured water flowing through fractures in the 2.7-billion-year-old sulphide deposits in a copper and zinc mine near Timmins, Ontario, ensuring that the water did not come into contact with mine air.

To date the water, the team used three lines of evidence, all based on the relative abundances of various isotopes of noble gases present in the water. The authors determined that the fluid could not have contacted Earth’s atmosphere — and so been at the planet’s surface — for at least 1 billion years, and possibly for as long as 2.64 billion years, not long after the rocks it flows through formed.

“The isotopic compositions that they see in these samples are extremely strange, and the preferred explanation in the article seems to me the most likely one,” says Pete Burnard, a geochemist at the Centre of Petrographic and Geochemical Research in Vandœuvre-les-Nancy, France. “For the moment, I think we have to conclude that there are 1.5-billion-year-old fluids trapped in the crust.”

The findings are “doubly interesting”, Ballentine says, because the fluid carries the ingredients necessary to support life. The isolated water supply, he says, provides “secluded biomes, ecosystems, in which life, you can speculate, might have even originated”. His colleagues are now working to establish whether the water does harbour life.

The findings may also have implications for life on Mars, Ballentine says, though he acknowledges that the idea is speculative. The surface of Mars once held water and its rocks are chemically no different from those on Earth, he says. “There is no reason to think the same interconnected fluids systems do not exist there.”