A simple new technique to form interlocking beads of water in ambient conditions could prove valuable for applications in biological sensing, membrane research and harvesting water from fog. 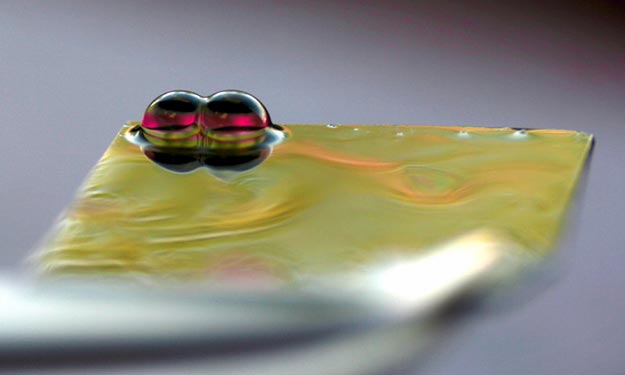 Researchers at the Department of Energy’s Oak Ridge National Laboratory have developed a method to create air-stable water droplet networks that are valuable for applications in biological sensing and membrane research.

Researchers at the Department of Energy’s Oak Ridge National Laboratory have developed a method to create air-stable water droplet networks known as droplet interface bilayers. These interconnected water droplets have many roles in biological research because their interfaces simulate cell membranes. Cumbersome fabrication methods, however, have limited their use.

“The way they’ve been made since their inception is that two water droplets are formed in an oil bath then brought together while they’re submerged in oil,” said ORNL’s Pat Collier, who led the team’s study published in the Proceedings of the National Academy of Sciences. “Otherwise they would just pop like soap bubbles.”

Instead of injecting water droplets into an oil bath, the ORNL research team experimented with placing the droplets on a superhydrophobic surface infused with a coating of oil. The droplets aligned side by side without merging.

To the researchers’ surprise, they were also able to form non-coalescing water droplet networks without including lipids in the water solution. Scientists typically incorporate phospholipids into the water mixture, which leads to the formation of an interlocking lipid bilayer between the water droplets.

“When you have those lipids at the interfaces of the water drops, it’s well known that they won’t coalesce because the interfaces join together and form a stable bilayer,” ORNL coauthor Jonathan Boreyko said. “So our surprise was that even without lipids in the system, the pure water droplets on an oil-infused surface in air still don’t coalesce together.”

The team’s research revealed how the unexpected effect is caused by a thin oil film that is squeezed between the pure water droplets as they come together, preventing the droplets from merging into one.

With or without the addition of lipids, the team’s technique offers new insight for a host of applications. Controlling the behavior of pure water droplets on oil-infused surfaces is key to developing dew- or fog-harvesting technology as well as more efficient condensers, for instance.

“Our finding of this non-coalescence phenomenon will shed light on these droplet-droplet interactions that can occur on oil-infused systems,” Boreyko said.
The ability to create membrane-like water droplet networks by adding lipids leads to a different set of functional applications, Collier noted.

“These bilayers can be used in anything from synthetic biology to creating circuits to bio-sensing applications,” he said. “For example, we could make a bio-battery or a signaling network by stringing some of these droplets together. Or, we could use it to sense the presence of airborne molecules.”

The team’s study also demonstrated ways to control the performance and lifetime of the water droplets by manipulating oil viscosity and temperature and humidity levels.