The chemical signature of water vapor emitted by combustion sources such as vehicles and furnaces has been found in the smoggy winter inversions that often choke Salt Lake City. The discovery may give researchers a new tool to track down the sources of pollutants and climate-changing carbon dioxide gas. 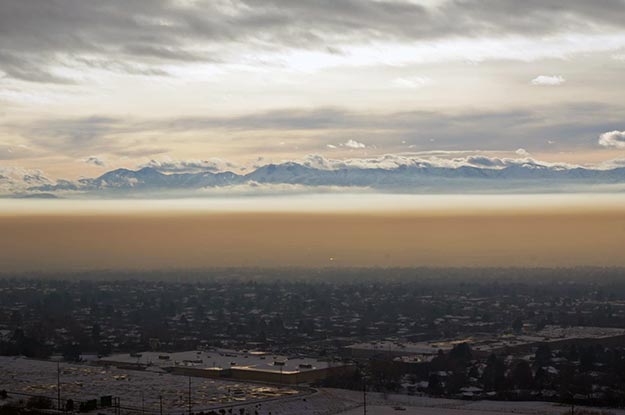 University of Utah scientists measured ratios of rare and common isotopes of hydrogen and oxygen in water, and estimated that water vapor from burning fossil fuels makes up as much as 13 percent of the water vapor in smog during Salt Lake’s winter inversions, with the percentage starting smaller and increasing as the inversion persists.

“Probably the two largest sources are cars and home heating,” says geochemist Gabe Bowen, senior author of the study published online in this week’s issue of the journal Proceedings of the National Academy of Sciences.

“During inversion days, we see times with especially high levels of combustion water in the air, such as immediately following the morning and evening rush hours. Morning is more pronounced,” he says. “The other is overnight, when we see continuous high levels, most likely related to home heating. We know the water is coming from fossil-fuel combustion because its concentration rises and falls with levels of carbon dioxide emitted by fuel burning.”

And water vapor in Salt Lake’s stagnant, smoggy winter inversions “contributes to the ‘chill’ we feel during these events, and likely also to frost formation and icy roads,” says Bowen, a University of Utah associate professor of geology and geophysics.

He says water from fossil-fuel burning “is a thus-far undocumented aspect of environmental emissions during inversion season,” and the study provides a new tool for measuring how much water is added to the atmosphere by burning fuel in cars, furnaces, industry and other sources.

“The new approach may help researchers monitor sources of greenhouse gas emissions from cities and study the impact of water of combustion on urban weather, quality of life and atmospheric chemistry,” the study says.

Bowen says the new technique for measuring the sources of combustion water in urban air “is in the early stages. We have a lot of ideas about potential applications.”

The study didn’t measure how much water vapor came from vehicles versus furnaces. But “our hope is that we will be able to distinguish emissions from different sources based on their contribution to water in the atmosphere over the city,” he adds.

The researchers also hope to apply their method to measuring greenhouse gas emissions from wood stoves or industrial combustion sources that produce water vapor, and “we might be able to use it to look at the efficiency of combustion – to diagnose combustion problems in car engines or industrial processes,” Bowen says.

The study dealt with water vapor in the “boundary layer” – the cold, smoggy layer from the ground up to the warmer air layer that caps and traps the inversion. 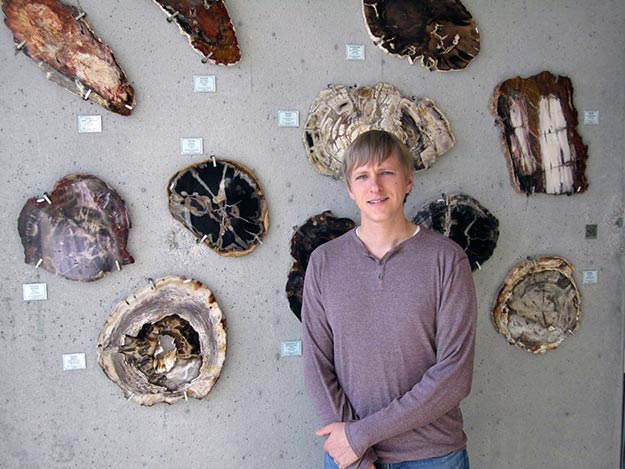 Bowen says water vapor from burning fuels “is not as scary as other stuff that comes out of our tailpipes. But it affects our local environment during these inversions.”

“In many or most inversion events humidity increases in the lower atmosphere, and that contributes to the apparent temperature and overnight frost formation,” he adds. “These events feel gray, gloomy and damp compared with the rest of our winter. Part of the reason is combustion-emitted water trapped in the boundary layer at the surface.”

The new study represents the latest use for stable isotope analysis, a technique that looks at ratios of rare to common weights or isotopes of elements such as hydrogen, carbon, oxygen and nitrogen. The isotopes are stable; they don’t decay radioactively.

University of Utah researchers have used the method to help identify sources of cocaine and counterfeit currency, the diets of early human ancestors and the routes traveled by elephants in Africa, and even to help identify a murder victim based on isotope analysis or hair that pointed police to the region where the victim had lived.

In natural water, the ratio of heavier, rare oxygen-18 to lighter, common oxygen-16 is low because the heavier isotope falls out first as rainstorms move inland. The same is true of deuterium, rare hydrogen-2, compared with the common isotope, hydrogen-1.

Water produced from burning or combustion is different. The ratio of hydrogen-2 to hydrogen-1 is very low, because hydrogen in fuel comes from ancient plants and microbes that preferred hydrogen-1. But the ratio of oxygen-18 to oxygen-16 is much higher compared with natural water. That’s because burning fuel uses oxygen in air – oxygen produced by plant leaves from which heavier oxygen-18 evaporated more slowly than lighter oxygen-16.

Bowen and colleagues used this unusual signature to devise a scale on which they can estimate the amount of combustion-derived vapor in any air sample. The approach works best in inversions during Utah winters, but the researchers believe they may also be able to detect water from combustion with careful measurements during times without inversions.

Combustion water vapor and carbon dioxide climbed from 7 to 10 a.m. due to traffic, began dropping at 10:30 a.m., then rose during the evening rush, peaked by 8 p.m. and remained level until midnight as furnaces worked. The vapor and gas levels dropped by 3 a.m., due to canyon winds and as dew and frost reduced water in the air.

The researchers estimated oxygen and hydrogen isotope composition of water from burning natural gas and gasoline, confirming their estimates for gasoline by testing tailpipe water from an inefficient old SUV and younger, more efficient sedan.

They calculated how much water from tailpipes must be added to the air to produce the levels seen in the air during inversions. They estimated conservatively that up to 13 percent of water vapor in inversions comes from burning fuels. That is a large percentage given that combustion water is only 0.004 percent of the global water cycle.

Co-author Strong created a computer model to simulate how water enters a Salt Lake City inversion from wind, rain, snow and combustion emissions, how those contribute to air moisture. The model predicted what researchers saw, including the daily patterns of traffic and furnace water vapor.

The peak in combustion water vapor during the overnight home-heating period was about half that as after morning and evening rush hours, largely because modern furnaces condense water as they extract heat.

“We might use this new tool to understand where the carbon dioxide emissions are coming from,” Bowen says. “Emissions of carbon dioxide from different sources will produce different amounts of water vapor.” The same may prove true of other combustion pollutants such as fine particulates and nitrous oxides, eventually allowing water vapor to be used to better track their sources as well.